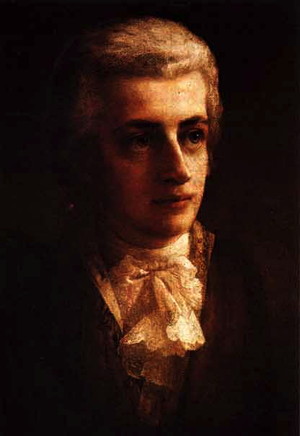 This 7th event of this Le Salon de Musiques season features works by Wolfgang Amadeus Mozart, among others.

In 1784, as part of his 450 scores already written –  including six of his Piano Concertos – the Austrian prodigy produced his Quintet for Piano and Winds – Oboe, Clarinet, Bassoon, and Horn – in  E Flat Major K 452.

This wonderful piece is totally exquisite:  one can feel the style and structure of another piano concerto, written in three movements, where each instrument can find its “own space to sing.”

BEETHOVEN was so impressed by this work that he immediately decided to write his own quintet with the same structure, the same instrumentation, and in the same key.

About his quintet, MOZART wrote to his father Leopold, saying, “I myself consider it to be the best work I have ever written in my life.”

Initially scheduled to be performed on March 21, in presence of the Prince Aloys LIECHTENSTEIN, the piece finally Premiered at the Burg Theatre in Vienna on April 1, 1784, but the Prince did not show up. MOZART was at the Piano. During the next years, MOZART stayed in Vienna, where he tried to make a living through his multiple concerts, organized by Philanthropists, most of the time. He also became a music teacher. After getting married to Constanze WEBER, the couple had six children: Raimund Leopold was born in 1783, Karl Thomas in 1784, Johann Leopold in 1786, Theresia in 1787, Anna in 1789, and Franz Xaver Wolfgang in 1791. Four of them died during childhood. Karl Thomas and Franz Xaver were the only survivors.

His good friend and Patron Otto Von GEMMINGEN, who was the Master of the Masonic Lodge “Beneficence”, introduced MOZART to the freemasonry in 1784.  As a new member, MOZART invited his father and his close friend Joseph HAYDN to join him. One year before he died, his successful masonic opera “The Magic Flute” was composed.

As a court musician for the Imperial Court of Emperor Joseph II, MOZART did not make enough money, and his financial situation became terribly difficult. The composer decided to travel again all over Europe, attempting to get more engagements, but his health declined quickly. Severe colic attacks with rheumatic fevers struck him down. Just a few months after leaving Vienna, MOZART had to stay in bed again, as his medical situation became critical. His doctor and friend, Sigmund BARISANI, assisted him until the end.

On December 5, 1791, MOZART died at the age of 35. Several rumors said that the Composer was poisoned by his competitor Antonio SALIERI.

A few weeks before, Constanze revealed that her husband spoke himself about a potential poisoning. Today the real circumstances of his death remain unclear. MOZART was buried in a mass grave at the St MARX cemetery in Vienna.

A celebration of W. A. MOZART, featuring his wonderful Quintet for Piano & Winds, along with several Genius European Composers,
F.POULENC, R.HAHN, E.SATIE,
&
Leo SMIT (including one L.A. PREMIERE).

The program will be performed by world renowned artists:

(Special offers are available on line.)

*(Including French Champagne, and gourmet sandwich buffet catered by Patina.)