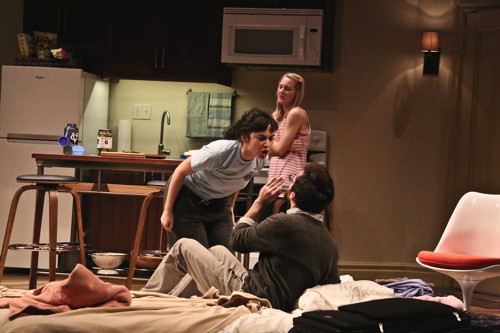 It’s disconcerting to begin watching a one-act play billed as a comedy (per the press release) only to discover it’s not at all funny. Dark, yes, and full of sharp observations, but not amusing, at least to me. Bad Jews by Joshua Harmon doesn’t actually have a funny premise: two cousins squabble over a treasured family heirloom. All the action takes place in a New York studio apartment, owned by the parents of two of the cousins.

The main problem with Harmon’s play is that it feels like a therapy session, as if Harmon himself has experienced a fractious relationship with one of his own relatives and has used the theater stage to exorcise the episode.

Additionally, none of the characters is at all appealing. One cousin, Jonah Haber (Raviv Ullman), is a whiny milquetoast. The two principle antagonists are Jonah’s brother Liam (Ari Brand) and their cousin Daphna Feygenbaum (Molly Ephraim). Daphna swears she is the most devout Jew in her family, and therefore is the most deserving of an important heirloom that belonged to their recently deceased grandfather. It’s a chai – a gold Hebrew symbol for ‘living’ – that their grandfather managed to preserve while incarcerated in a concentration camp. Funnily enough, for such a devout Jew, Daphna fails to pronounce the name of the medallion correctly. (As in Hebrew, the ch or kh in Yiddish is a “voiceless fricative,” with a guttural pronunciation that lands between h and k.)

Meanwhile, Liam, who missed grandfather’s funeral because he was skiing in Aspen, shows up to sit shiva with the rest of the cousins, bringing with him his soon-to-be-fiancee Melody (a bubble-voiced shiksa played by Lili Fuller). Here’s another character that’s deliberately annoying. Melody is written to be everything that a Jewish family might deplore. She’s blonde, she’s squeaky and she’s none-too-bright. The thing is, Liam is planning to propose to Melody using their grandfather’s chai…

Judgmental, self-righteous, prone to sniping remarks — Ephraim’s character grates from the start to her final false note at the finish. She’s so unpleasant it’s difficult to accept that Liam and Melody would even stay in the cramped apartment with her.

The performances are not at fault. Under Matt Shankman’s excellent direction, the (largely) hostile banter flows at a brisk pace and the actors inhabit their obnoxious personae with gusto.

All up, the vitriol is too savage and the characters way too one-note and unlikable for Bad Jews to register as a comedy.