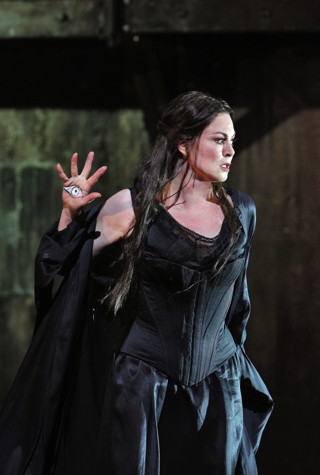 Hector Berlioz felt a strong connection to Virgil’s epic poem Aeneid and so when he began to compose his opera The Trojans / Les Troyens, based on Books 2 & 4 of the poem, it was a labor of love. Berlioz wrote the libretto and score of the opera – a massive five act, five-hour work – over two years, between 1856 and 1858. Even before the monumental work was finished, he expressed reservations about the opera’s viability for the prestigious Paris Opera and indeed he proved correct. The Paris Opera rejected the work. A cut version of Acts 3 – 5, retitled The Trojans at Carthage, was staged at the Theatre Lyrique in 1863, but the first half – The Fall of Troy – remained unperformed during the composer’s lifetime.

Thereafter, it appeared periodically in heavily cut versions, the two halves occasionally performed on successive evenings. While the work had its champions (among them Sir Thomas Beecham and Rafael Kubelik), performances of the work have been infrequent. The Trojans requires a large cast and the three principal roles – the Trojan prophetess Cassandra, the Trojan prince Aeneas and the Carthaginian queen Dido – are all difficult to master and execute. The supporting cast is large, the orchestral forces substantial and the two halves of the work require extensive scenic and costumes construction, resulting in an expensive proposition that is beyond the resources of most opera companies.

There have been periodic revivals of the work, notably for the Met’s Centennial Season in 1983. San Francisco Opera gave one of the earliest American stage performances of the work in 1966. In June this year, the company revived the work for the first time in 47 years, joining in a spectacular co-production with the Royal Opera Covent Garden, Milan’s Teatro alla Scala and the Vienna State Opera.

The Trojans is split into two parts. Part One begins outside the wall of the city, after the marauding Greeks have apparently fled. Cassandra foresees impending disaster, but her prophetic warnings are ignored. Armed Greeks spring from the famed mechanical horse that was seemingly left behind by them as a peace offering. The city is conquered and the population slaughtered. The ghost of the slain Trojan hero, Hector, appears to Aeneas and warns him to flee before the city is destroyed, foretelling that Troy will live on in a new colony in Italy that Aeneas and his band will establish. Cassandra and the remaining Trojan women commit suicide rather than submit to the Greek conquerors.

In Part Two, Aeneas and his band of Trojan refugees arrive in the North African city of Carthage, where they are welcomed by the locals, led by Queen Dido. The Trojans help the Carthaginians defend the city against an attack, and Dido and Aeneas fall in love. Eventually, the gods call upon Aeneas to resume his destiny and proceed to Italy to found the new Troy – Rome. He departs and the distraught Dido commits suicide, cursing the Trojans and Aeneas. In death, Dido acknowledges that eventually Rome will triumph.

This magnificent production was lavish and featured a stellar cast. Former San Francisco Opera music director Donald Runnicles returned to conduct, and he and the orchestra were superb throughout. Highlights included the bombastic triumphal march as the Trojans celebrate their presumed victory, followed immediately by the beautiful woodwind music that follows as Andromache, widow of the slain hero Hector appears with her young son Astyanax. The famous orchestral interlude from Act 3, the “Royal Hunt and Storm,” was also brilliantly played, although the offstage hunting horns sounded a bit too faint. Tenor Bryan Hymel, in the pivotal role of Aeneas, had to withdraw from the production after the first few performances due to illness. Even so the performance was a resounding success.

Anna Caterina Antonacci as Cassandra and Susan Graham as Dido, each with long experience in their roles, both gave extraordinary performances. Antonacci was a captivating Cassandra, at first frantic and frustrated at the doom she alone can see, then resolved and heroic in its face. Graham as Dido gave a towering performance as the tragic queen, from her courtship of Aeneas to the final, searing rage at her abandonment. Corey Bix, the replacement casting for Aeneas, was not on their level, but he managed the extremely difficult part well enough. The rest of the cast was superb. Brian Mulligan was outstanding as Chorebeus, Cassandra’s noble fiancé who fails to heed her warnings to save himself. He sang beautifully and his loving concern for his tormented bride-to-be was a perfect counterpoint to Antonacci’s frenzied seer. Sasha Cook as Dido’s sister Anna, Nian Wang as Aeneas’ son Ascanius and Christian Van Horn as Dido’s minister Narbal each gave excellent support. Tenor Rene Barbera, whom Los Angeles audiences saw earlier this year as Almaviva in The Barber of Seville, was luxury casting as the poet Iopas, but he brought the house down with his singing of the aria “O blonde Cérès.”

The production by David McVicar was suitably large in scale but did not overwhelm the cast. It featured a battered industrial set for the destruction of Troy, based on the 19th century siege of Sevastopol. The Trojan horse, which ultimately bursts into flames, was made up of implements of war – weapons, cannons, spears and the like. For the second half of the opera, the scene changed to a sun drenched city of Carthage, featuring walls lined with choristers and a mini City model as the focal point of the set which moved and shifted during the scene changes. So attractive and effective. The costumes by Moritz Junge featured mid-19th century military uniforms for the Trojan scenes and more colorful, flowing robes once the action shifted to Carthage.

There is one remaining opportunity to experience this magnificent production, this Wednesday at 6PM at the War Memorial Opera House in San Francisco. Don’t miss this operatic triumph. Take it from me; San Francisco’s production of Les Troyens is worth traveling to see!