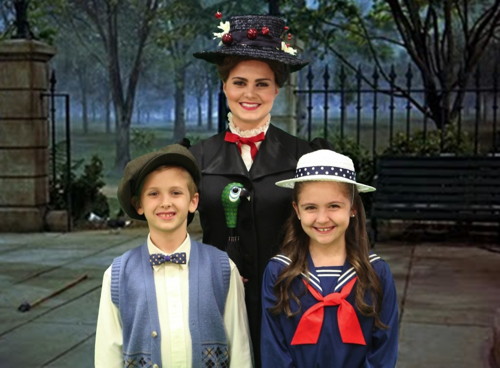 The Deco District’s flagship theater takes on a Broadway behemoth, and the result is practically perfect in every way.

In the early 2000s, when Disney started mining its film properties for theatrical gold after the Broadway success of Beauty and the Beast and The Lion King, it wasn’t long before P.L. Travers’ flying nanny Mary Poppins was queued up for the stage.

The company was certainly riding high at the time and had the bucks to put the biggest theatrical muscle behind the production, including powerhouse producer Cameron Mackintosh (Les Miserables, Cats!, Phantom of the Opera), who was given the challenge of transferring the content of Travers’ books to the stage while retaining enough familiar scenes from the beloved 1964 film version to make audiences happy.

As written by Julian Fellowes, with original songs by the Sherman Brothers and additional material by George Stiles and Anthony Drewe, the musical hews closely to the film, but adds characters and incidents from other “Poppins” books.

Any Poppins purist knows that the apple-cheeked Andrews was a bit too sweet for Travers’ vain and rather militaristic character, and the stage version takes some steps to amend that with the inclusion of some darker sequences. In one, Mary Poppins frightens her disobedient charges by having their abused toys come to life. In another, a sinister nanny named Miss Andrew is introduced to torment the children after Mary’s temporary departure. Additionally, the dysfunctional relationship between the emotionless Mr. Banks and his family is more pronounced.

As big as it was for Broadway, this effects-laden piece is a true challenge for smaller companies. Directed by Greg Hinojosa, the Woodlawn Theatre’s production is yet another marvel of energy and ingenuity. The stage is just large enough for such an elaborate undertaking, and Benjamin Grabill’s impressive sets have been constructed to maneuver quickly during the show’s frequent scene changes. Kurt Wehner does a terrific job with his special effects design, which includes a couple of flying scenes (including Mary’s spectacular descent over the audience from the balcony) and Bert’s gravity-defying chimney climb. Rose Kennedy’s costumes are also spot-on.

Darren Newhardt’s nine-piece orchestra is rich and full — a Woodlawn trademark. As for the players, David Blazer makes a fine, prickly Mr. Banks and Megan DeYoung is a real standout as his ever-suffering wife. Twyla Lamont adds a welcome touch of over-the-top camp as the terrifying Miss Andrew, singing “Brimstone and Treacle” with gusto. Madison Calderon and Jack Dulling, as Jane and Michael, are precocious without becoming saccharine. Travis Trevino is a fine Bert and Mia Migliacco charms as the title character.

The Woodlawn’s ensemble cast also shines, especially in the showstopper “Step in Time.” As choreographed by Eric Mota, it’s an undeniably rousing number.

All in all, this production can be considered another fine feather in this talented company’s cap.