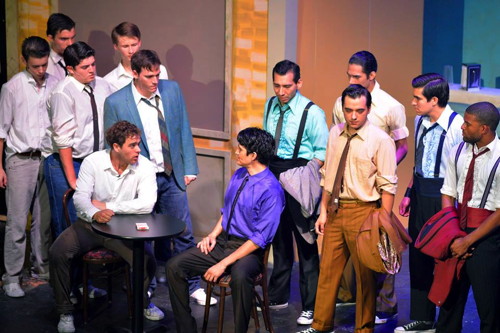 Almost 60 years ago, Broadway audiences were shocked by West Side Story, an audacious piece of musical theater that dared to take on the subject of race relations. With Jerome Robbins’ fierce, balletic choreography, Leonard Bernstein’s kinetic score, and Stephen Sondheim’s trademark overlapping lyrics, it certainly was a sensation, winning two Tony Awards.

With that kind of talent behind it, it’s no surprise that West Side Story wears its age well, offering up musical delights to ongoing generations of theatergoers. And in the right hands, it’s a poetic combination of movement and music that’s absolutely mesmerizing today.

I’m happy to report that the show is definitely in the right hands with the Woodlawn Theatre’s revival that opened this past weekend. It’s a superbly-staged production that oozes nostalgia, recalling the excitement of the New York theater scene in the 1950s.

As everyone knows, this is Shakespeare’s story of Romeo and Juliet, transferred to the mean streets of 1950s Manhattan. Puerto Ricans have come to town and formed their own gang (the Sharks) and the white boys (the Jets) aren’t at all happy about their turf being invaded. But when Jets leader Tony first lays eyes on Shark girl Maria, he is determined to have her — even if it instigates a war. And, of course, it does.

So many of the songs have become standards that it’s easy to become nostalgic while you watch. It’s also fun to see them performed onstage again and to remember how they fit into the story. They’re delivered with gusto by the Woodlawn’s capable cast, and musical director Darrin Newhardt’s splendid 13-piece orchestra faithfully reproduces Bernstein’s jazzy, provocative score, which is so essential for the dance numbers.

As for the performances, Kyle Krambeck and Mariela Flor Olivo are sweet as the star-crossed couple, with Olivo in particular possessing a lovely singing voice. Matthew Lieber is another standout as Tony’s best pal, Riff. Also appealing are Travis Trevino as Maria’s brother, Bernardo, and Alyssa Lopez as his feisty girlfriend, Anita.

In this show, though, it’s all about the company, and here the Woodlawn delivers again, populating the stage with talented singers and dancers. The Jets deliver a great “Gee, Officer Krupke” and the Shark girls squeeze every last drop of the sardonic humor out of “America.”

West Side Story plays Fridays and Saturdays at 8 p.m. and Sundays at 3 p.m. at the Woodlawn Theatre, 1920 Fredericksburg Road, through September 6th. Tickets can be obtained online or by calling (210) 267-8388.