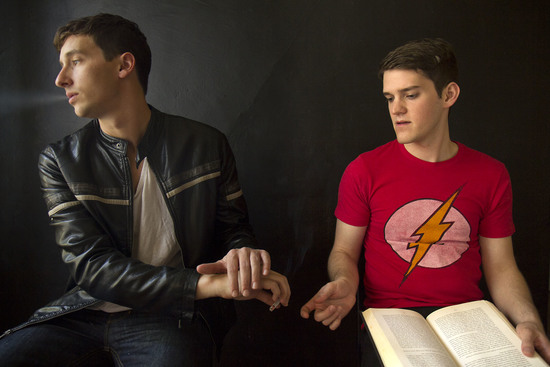 Written and Directed by Thomas Yungerberg

Thomas Yungerberg demonstrates a good ear for dialogue with his comedic story of a couple of disgruntled roommates who plan a radical solution for the corruption running rampant in Washington.

Stu (Joshua Verges) comes home furious, having received an expensive parking ticket because his space was blocked by a neighbors oversized truck. Roommate Ben (Yungerberg) offers him a bong hit to soothe his nerves, but it only serves to intensify his anger.

He rants about the neighbors, the cops, and Washington D.C. the city they live in which makes him focus his anger at politicians in particular, and how their inherent corruption is making life impossible for everyone else. He decides that the only solution is to kill them all, and he starts to lay out his plan, however preposterous it may be.

Throughout the evening, friends and neighbors come and go, supplying amphetamines and helping the now-manic Stu to write a manifesto about his scheme. Things really come to a head when Gun Guy Glenn (Chris Hallett) arrives with a pistol and cocaine, pitching Stus hysteria even higher.

Despite its potentially grim premise, Yungerbergs play is bitterly funny, depicting as it does the drug-addled obsessions of roommates whove clearly participated in variations of this conversation many times before. Its a vivid portrait of a couple of post-collegiate twenty-somethings who are battling their feelings of powerlessness by railing at nothing.

Verges provides an appropriately explosive performance as Stu, and is well-matched by Yungerberg as Ben, a mellow stoner who serves as the yin to Stus yang. Hallett exudes a vague sense of danger as Glenn, and the rest of the cast, including Emma Sleath, Chiara McCarty, and Keshava Betts, all fill their roles memorably.

Kill All Politicians plays one final Fringe date: June 26, at Asylum @ 6470, 6470 Santa Monica Blvd. Information and tickets can be obtained on the main site.

Washed in the Blood

Written and Directed by Joshua Crone

Jordan Merimee plays Keith, a young evangelical whose faith is strong, thanks to the encouragement of his mentor, Pastor Jim (Richard Roddy). When delinquent Kevin (Jordan Michael Thompson) shows up at his school, Keith finds himself wanting to save this newcomer from the fires of hell, but he is also intrigued by the boys rebellious lifestyle. They make a deal: If Keith will try Kevins way of life, Kevin will give religion a chance.

But when a shooter arrives, targeting his victims based on their belief, their lives are permanently altered, and Keiths faith is shattered to the core.

As portrayed by Merimee, Thompson, and Roddy, Crones characters are intriguingly complex. Keiths fervent beliefs blind him to the obvious, including Pastor Jims questionable past. The pastor himself uses religion as a weapon to maintain firm control of his followers, while Kevin questions everything and refuses to take any of it at face value.

Washed in the Blood plays its final Fringe date on June 24 at Complex Theatres, 6468 Santa Monica Blvd. Information and tickets can be obtained on the main site.