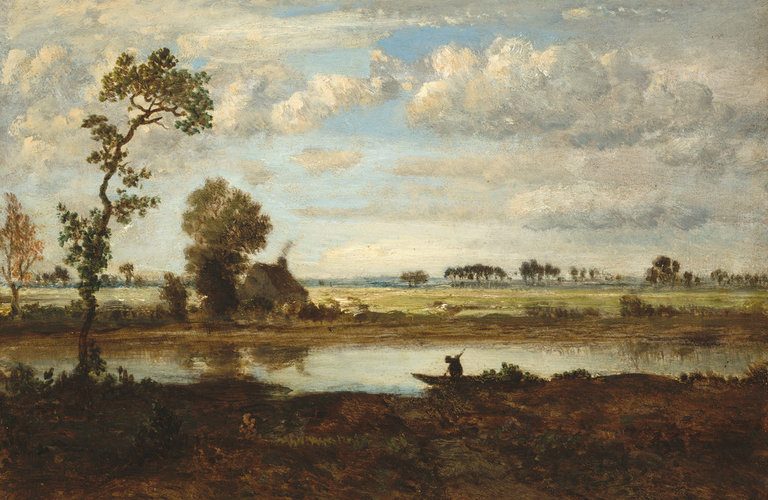 “Unruly Nature: The Landscapes of Théodore Rousseau” at the Getty

No line is an accident and every line has an expressive force. So states Edouard Kopp Maida and George Abrams Associate Curator of Drawings, Division of European and American Art, Harvard Art Museums/Fogg Museum and co-curator, along withassistant curator in the Department of Paintings at the J. Paul Getty MuseumScott Allan, ofUnruly Nature: The Landscapes of Thodore Rousseau.

Thodore Rousseau was considered one of the great French painters of the second half of the 19th century. An avid believer in pantheism, the artist spent a lifetime observing wild nature and capturing it on canvas and paper back in his studio.

Currently on view at the J. Paul Getty Museum, Getty Center through September 11, 2016, thisthe first major international loan exhibition in North America entirely dedicated to Thodore Rousseau. The detailed exhibition has been co-organized by the J. Paul Getty Museum, Los Angeles and the Ny Carlsberg Glyptotek, Copenhagen. The collection will subsequently move to Copenhagen, where it will be on display from October 13, 2016, through January 8, 2017.

Edouard Kopp observes that the exhibition will feature familiar pictures from well-known collections, but it will also include works that have not been seen in public in many decades and, in some cases, that have never before been exhibited.

Indeed it features over 70 works from 40 museums worldwide as well as a handful of private collections. This Getty exhibition marks is the first and largest show entirely devoted to the artist since 1967, when the Muse du Louvre in Paris celebrated the centenary of the French artists death with a show.

From the press release:
Though his reputation was eclipsed in the early twentieth century with the triumph of Impressionism, Thodore Rousseau (1812 -1867) was one of the giants of French landscape in the second half of the nineteenth century, and his work was avidly collected for staggering sums across Europe and North America. Bringing together about seventy-five paintings and drawings, this international loan exhibition explores the astonishing technical and stylistic variety of his work, revealing him to be one of the most exciting, experimental, and affecting artists of his day.

Unruly Nature: The Landscapes of Thodore Rousseau features a gorgeous selection of the artists paintings, both large scale and cabinet works, most of which are frequently dramatic and immersive vistas of nature. Also on view are numerous drawings of breathtaking precision, some of which indicate a Japanese influence.

His detailed and intense style is underpinned by his early draftsmans training. Scott Allan emphasized that Rousseau was equal parts painter and draftsman.

Rousseaus art has epic mood swings, from the most turbulent, heady, and impulsive to the most dispassionate, patient, and analytical. This is dramatically apparent, for example, in his two contrasting views of Mont Blancone painted at the very beginning of his career and one at the very end, Allan explains, referencing Mont Blanc Seen from La Faucille, Storm Effect (183536; Ny Carlsberg Glyptotek, Copenhagen) and View of Mont Blanc, Seen from La Faucille (186367; Minneapolis Institute of Art), both of which will appear in the exhibition.

Unruly Nature: The Landscapes of Thodore Rousseau presents a rich selection of paintings and drawings by one of the giants of nineteenth-century French art. Thodore Rousseau (18121867) achieved international fame as a leader of the so-called Barbizon School, named after the village near the Forest of Fontainebleau where he spent much of his career. The exhibition, co-organized with the Ny Carlsberg Glyptotek, Copenhagen, will be on view June 21 through September 11, 2016, at the J. Paul Getty Museum at the Getty Center. It will subsequently travel to Copenhagen, where it will run from October 13, 2016, through January 8, 2017.

The exhibition will feature more than seventy worksboth paintings and drawings making it the largest show devoted to Rousseau since the 1967 retrospective at the Muse du Louvre in Paris, which marked the centenary of the artists death. More importantly, with some forty museums and private collectors from the United States, Canada, France, Denmark, and the Netherlands generously lending works, Unruly Nature will be the first comprehensive loan exhibition devoted to Rousseau in North America.

The exhibition explores the full scope of Rousseaus achievement, revealing how creative, diverse, and experimental the art of landscape could be in the decades just before Impressionism, says Timothy Potts, director of the J. Paul Getty Museum. His astonishing technical and stylistic variety, wondrously admired by contemporaries for matching the diversity of nature itself, continued to be celebrated in the late nineteenth and early twentieth centuries, when his pictures were among the most admired and coveted in the world.

Trained in the Neoclassical landscape tradition but swept up in the currents of Romantic naturalism inspired by 17th-century Dutch and more recent English art, Rousseau played an important role in landscapes rapid rise to preeminence in French art in the decades after 1830. Traveling widely around France, he tackled an impressive range of motifs, from mountain and forest to field and plain, and tried his hand an unprecedented variety of seasonal, weather, and lighting effects, creating a body of work that vastly expanded the vocabulary of French landscape expression.

Notes Scott Allan, assistant curator in the Department of Paintings at the J. Paul Getty Museum and co-curator of the exhibition, The show aims to represent the full extent of Rousseaus art, striking a balance between paintings and drawings, smaller and larger pictures, finished and unfinished work, and the private and public sides of his multifaceted practice, which he conducted partly outdoors but mostly in the studio. Throughout, were paying special attention to Rousseaus working procedures and techniques, and consequently stressing the consummate artifice of his landscapes.

In conjunction with the exhibition, the Getty and the LA Philharmonic are collaborating on an evening concert at the Hollywood Bowl, scheduled for August 18. The ebullient and erudite Nicholas McGegan will conduct a concert program inspired by Rousseaus own taste for composers such as Mozart, Beethoven, and Weber. An accompanying video will provide insight into the various musical and artistic crosscurrents in early- to mid-nineteenth-century France that shaped the sensibilities of Rousseau and his Romantic generation. The collaboration will continue in the Gettys galleries with an audio tour featuring a musical playlist selected by maestro McGegan in addition to a second audio tour presenting commentary from curators Allan and Kopp on highlights of the exhibition.

Unruly Nature: The Landscapes of Thodore Rousseau is co-organized by the J. Paul Getty Museum, Los Angeles, and the Ny Carlsberg Glyptotek, Copenhagen. The exhibition will be accompanied by a substantial scholarly catalogue, Unruly Nature: The Landscapes of Thodore Rousseau, co-authored by the exhibitions curators Scott Allan and Edouard Kopp, with a contribution by Line Clausen Pedersen of the Ny Carlsberg Glyptotek. Published by Getty Publications, the lavishly illustrated catalogue includes essays on Rousseaus draftsmanship, his painting process, his works reception at the Paris Salon, and the evolving market for his art both during his lifetime and following his death.

The Getty Center is open Tuesday through Friday and Sunday from 10 a.m. to 5:30 p.m., and Saturday from 10 a.m. to 9 p.m. It is closed Monday and most major holidays, open on July 4. Admission to the Getty Center is always free. Parking is $15 per car, but reduced to $10 after 5 p.m. on Saturdays and for evening events throughout the week. No reservation is required for parking or general admission. Reservations are required for event seating and groups of 15 or more. Please call (310) 440-7300 (English or Spanish) for reservations and information. The TTY line for callers who are deaf or hearing impaired is (310) 440-7305. The Getty Center is at 1200 Getty Center Drive, Los Angeles, California.