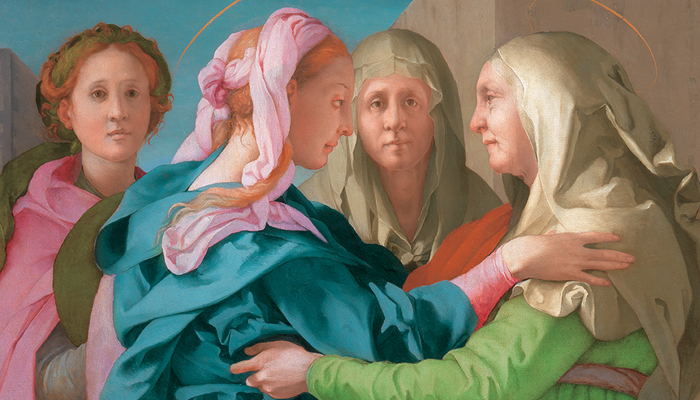 As the two women greet one another, the challenging gaze from each of their saintly companions draws us into their circle of celebration.

The monumentality of the four female – and almost floating – figures captures this crucial moment in the story of Christianity.

In Christianity, the Visitation is the auspicious encounter between two cousins, as recounted in the Gospel of Luke. Mary visits her relative Elizabeth while they are both pregnant: Mary with Jesus, and Elizabeth with John the Baptist. We see the young, pregnant Virgin Mary graciously greeting her elder cousin Elizabeth, who is also with child. There is a riot of vivid colors: hot pink, pale pink, orange, olive, magenta, cerulean blue, luscious white and even electric mint green.

The Florentine painter Jacopo da Pontormo (1494–1557) immortalized this meeting at the end of the 1520s, when he created one of his most moving and groundbreaking paintings; the innovative altarpiece of the Visitation.

Never shown outside of Italy before now, the magnificent and towering work, with its vibrant hues, is now on display at the Getty Museum through April 28, 2019. Pontormo’s large-scale work was created by him at the time of the siege that brought to an end the last Florentine Republic (1529–1530).

Recent conservation has created the extraordinary opportunity for the work to travel to Los Angeles for the first time from Carmignano (near Florence) to the United States. This rare exhibition presents Pontormo’s spectacular painting alongside its preparatory drawing and two exceptional portraits painted during the same tumultuous period.

This small but thoughtful exhibition is designed to put the Visitation in its proper context. The result is quite an extraordinary feast for the eyes!

In Catholicism, it is held that the purpose of this visit was to bring divine grace to both Elizabeth and her unborn child. Even though he was still in his mother’s womb, John became aware of the presence of Christ, and leapt for joy as he was cleansed from original sin and filled with divine grace. Elizabeth also responded and recognized the presence of Jesus, and thus Mary exercised her function as mediatrix between God and man for the first time.

The recent restoration of this masterpiece of Mannerist art has created the extraordinary opportunity for the work to travel for the first time from Carmignano (near Florence in Italy) to the United States. Pontormo: Miraculous Encounters presents Pontormo’s spectacular altarpiece together with its preparatory drawing and with another masterpiece by the artist, the Portrait of a Young Man in a Red Cap (Carlo Neroni?). Pontormo painted this portrait of the handsome yet enigmatic young man during the same dramatic months of the siege of Florence. Believed to be lost, it has only been recently rediscovered in a private collection in Europe.

This exhibition is made possible with lead funding from an anonymous donor in memory of Melvin R. Seiden and generous support from Mr. and Mrs. J. Tomilson Hill and Mr. and Mrs. Lawrence R. Ricciardi.

Additional support towards the restoration of the parish church of San Michele and former Franciscan friary of Carmignano is provided by the Foundation for Italian Art and Culture (FIAC).

An international traveling exhibition will bring works by the great 16th-century Florentine painter Pontormo (Italian, 1494-1557) to Los Angeles for the first time. Pontormo: Miraculous Encounters, on view at the J. Paul Getty Museum from February 5, 2019 through April 28, 2019, features the artist’s recently restored altarpiece the Visitation (about 1528-1529).

“It is a privilege to bring the Visitation, one of Pontormo’s supreme masterpieces and one of the most enigmatically beautiful paintings of 16th-century Italy, to Los Angeles. This is the first time this painting has traveled to the United States. It is one of those exceptional paintings that, once seen, will never be forgotten, and I have no doubt it will be a revelation to our visitors both for its striking beauty and for its moving depiction of a key episode in recognition of Christ’s coming,” said Timothy Potts, director of the Getty Museum.

Organized by the Getty Museum in conjunction with the Gallerie degli Uffizi in Florence and the Morgan Library & Museum in New York, the exhibition presents works of exceptional importance by Pontormo, looking at his innovative oeuvre as a painter both of devotional subjects and of portraits.

Over six feet tall, the Visitation depicts Mary’s meeting with her cousin, Saint Elizabeth, when both were expecting their sons, Jesus Christ and John the Baptist. First recorded in 1677 by the historian Giovanni Cinelli, the painting remained virtually unknown until its re-discovery in 1904 in the small parish church of Carmignano, a hill town west of Florence. The intricate arrangement of the draperies and range of arresting colors in intense, saturated hues—fully revealed by its recent conservation—produce an effect of abstraction that was greatly admired by 20th-century artists and connoisseurs.

The recent restoration of the panel brought to light important information about the artist’s technique that illuminates the artist’s creative process. The Visitation is shown alongside the only known preparatory drawing for it, on loan from the Uffizi, as well as two painted portraits and their related drawings.

“By presenting the Visitation and two portraits produced in the same years alongside their preparatory drawings, this exhibition gives us a rare opportunity to reconsider Pontormo’s artistic evolution at a crucial stage in his career,” explained Davide Gasparotto, senior curator of paintings at the Getty Museum. “It is especially moving to think of a great master like Pontormo working at the height of his skill during such a tumultuous period, when his city was under siege. His elegant and accomplished work from this era is imbued with a compelling vulnerability and sentiment.”

The paintings and drawings presented in the exhibition were made by Pontormo between 1528 and 1530, during an ongoing crisis in Florence. Though Republican forces had driven out the powerful Medici family in 1527, the triumph was short-lived. Dramatic military clashes culminated in a devastating siege that returned the Medici to power, establishing their autocratic regime as dukes of Florence. Pontormo was not active in the city’s defense during the siege, but just before these events he had managed to purchase his home, a lifelong aspiration: he stayed in the city to protect his investment, seeking employment from the citizens who remained. These patrons commissioned portraits to record their appearance for posterity, wearing the latest fashions that demonstrate military readiness and active support of the Republic. They also commissioned devotional works, as they prayed for deliverance from military strife and starvation.

Pontormo’s Portrait of a Halberdier, 1529-1530, a well-known painting in the Getty’s collection, depicts a young man standing before a fortress wall dressed as a soldier, holding a halberd (a combination spear and battle ax). The formidable dress and pose of the subject is betrayed by his youthful face and slim build. The subject of this sophisticated and elegant portrait was convincingly recognized as a young nobleman named Francesco Guardi (who would have been 14-15 years old) though it has also been speculated that it may depict Cosimo de’ Medici, the future Grand Duke.

Another highlight of the exhibition is the rarely seen Portrait of a Young Man in a Red Cap, another captivating portrait from the same year. The painting, perhaps depicting another young man engaged in the defense of the city, Carlo Neroni, was known to scholars through documents and engravings but thought lost until it was re-discovered in 2008. This exhibition offers the public a first opportunity to see this remarkable work — which belongs to a private collection — following its recent restoration.

The exhibition is curated by Getty Museum Senior Curator of Paintings, Davide Gasparotto and Bruce Edelstein, coordinator of graduate programs and advanced research at NYU Florence.

The accompanying publication, Miraculous Encounters: Pontormo from Drawing to Painting, is published by Getty Publications and edited by Gasparotto and Edelstein.

Pontormo: Miraculous Encounters is generously supported by Janine and J. Tomilson Hill; additional support has been provided by the Foundation for Italian Art and Culture (FIAC). The exhibition has been organized to raise support for the conservation of the Parish Church and the former Franciscan convent of San Michele Arcangelo in Carmignano.

The J. Paul Getty Museum collects Greek and Roman antiquities, European paintings, drawings, manuscripts, sculpture and decorative arts to 1900, as well as photographs from around the world to the present day. The Museum’s mission is to display and interpret its collections, and present important loan exhibitions and publications for the enjoyment and education of visitors locally and internationally. This is supported by an active program of research, conservation, and public programs that seek to deepen our knowledge of and connection to works of art.