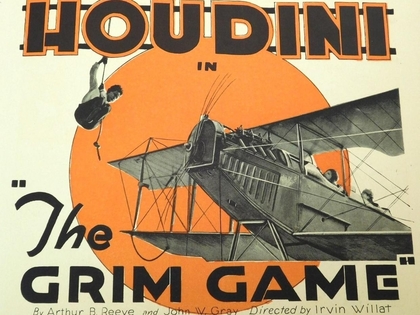 The magic of movies returns to the Sierra Madre Playhouse with an ultra-rare cinema gem starring the greatest magician of the 20th century, Harry Houdini. Houdini’s thrill-packed The Grim Game will play in Sierra Madre for one night only, one show only: 8pm on May 3rd but in a new collaboration; it will also be shown at the Catalina Island Museum on May 17th as part of a two-day celebration of silent film culminating in a screening of the quintessential flapper movie, Why Be Good? on the big screen of the the Avalon Casino Theater – William Wrigley Jr.’s Art Deco movie palace.

The Sierra Madre Playhouse wants to reclaim part of its cultural heritage. It became a cinema in 1924 and under a variety of names showed films until the early 1970s. It intends to start a regular film series linked thematically to its plays. Catalina Island Museum wants to have a foothold on the mainland to help spread the word about its  annual Silent Film Benefit, now in its 32nd year and one of the longest running celebrations of silent film in the world..

Everyone is invited to step back into 1919 — one hundred years ago — and see this lost classic as it was meant to be seen, with live accompaniment by the doyen of silent film musicians, Michael Mortilla, and violinist Nicole Garcia. This exciting event will be introduced by Houdini expert John Cox (www.wildabouthoudini.com).  Michael will talk about the importance of music in the silent era.

The Grim Game is a silent drama that showcases Houdini’s astonishing, world-famous talents as an escapologist, stunt performer and aviator. The film presents a series of Houdini’s trademark stunts and escapes and builds to an airplane pursuit climaxed by a mid-air collision.

The film was considered lost for decades until it was rediscovered, restored and shown in 2015. It’s a fascinating cinematic record, revealing the reason that Houdini was one of the biggest stars of the early 20th century.

Proceeds from this special event will be shared equally by the Playhouse and the Catalina Island Museum, which is generously providing this film.

The Catalina Island Museum offers the best in art and history exhibitions, music and dance performances, lectures by guest speakers from all over the world, and the finest in silent, documentary and international film. Located on Catalina Island at 217 Metropole Avenue, Avalon, CA 90704. Open daily: 10:00 am to 5:00 pm. CatalinaMuseum.org 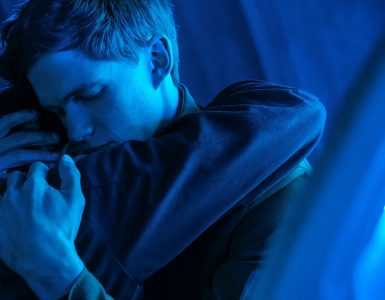 This poignant story of forbidden love is set against the backdrop of the Cold War.