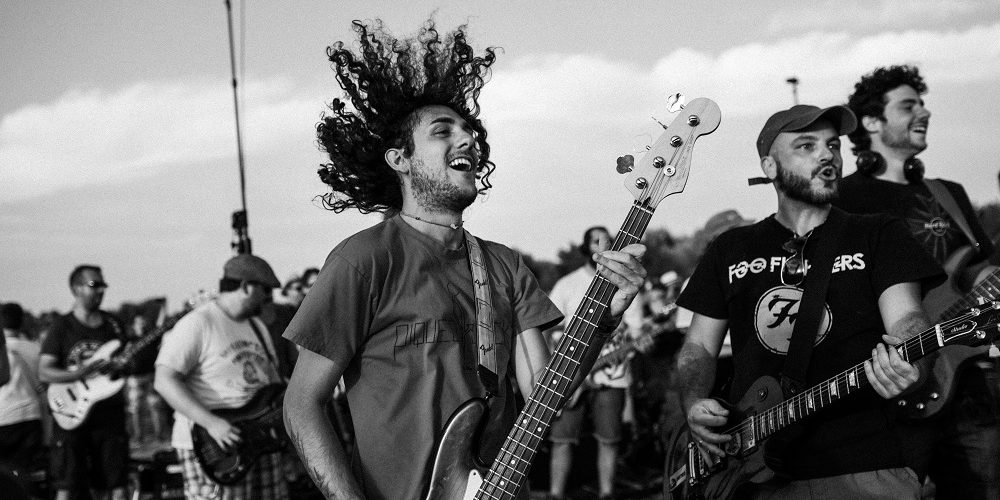 Anita Rivaroli’s exuberant documentary about passion in music made its North American debut at SXSW Online 2021.

Fabio Zaffagnini, a resident of Cesena, Italy, wanted the band Foo Fighters to come and play a gig in the tiny town. But how to entice them? The answer was to assemble a band of 1,000 musicians and singers to perform one of the band’s songs and release the video on YouTube. We Are the Thousand, Anita Rivaroli’s documentary chronicling this daunting task, is an exciting tribute to the impassioned people who came together to make it happen. It’s no wonder it received an Audience Award at this year’s SXSW.

Hoping that the video would receive a couple million hits, Zaffagnini said that it was specifically made for five people — Foo Fighters. It succeeded beyond their wildest dreams, escalating to more than 26 million hits and drawing the attention of Dave Grohl himself, who responded with a video message of affection in Italian, committing to making the journey to Cesena.

Before all of this happens, however, we follow Zaffagnini’s dream from its crowdfunding beginnings to reality — 1,000 people standing in Cesena’s Hippodrome Park, learning how to synch their instruments and voices to sound as one. “Learn to Fly” was chosen, because it was one of the band’s easiest songs. Zaffagnini and his team spent many sleepless nights figuring out the logistics of this massive undertaking. How do you get 150 drummers to play all at once in perfect synchronization?

It seemed far too intimidating at first, but with the help of a conductor, a click track and “traffic lights” that changed on the upbeats and downbeats, it finally worked. One can’t help but get the shivers to hear it all come together.

Grohl was as good as his word and the band came to Cesena. Rockin’1000 was in attendance. Zaffagnini was invited onstage and treated like royalty, and one of the giant band’s drummers, sporting a massive mohawk, also came up to accompany the Fighters on a song. “We’re gonna play all fuckin’ night for you!” Grohl exhorts. Talk about wish fulfillment.

Afterward, Zaffagnini’s mailbox filled up with emails from Rockin’1000 participants, wondering when they were going to do it again. He made it happen. This time, his goals were more ambitious — to have this gigantic band perform an entire set of songs from different artists. Indeed, we hear snippets of songs from White Stripes and The Verve.

Rivaroli’s film is an exuberant tribute to musicians who are passionate about their art. And it’s a lot of fun to watch one man’s gigantic dream become a reality. As one member of Rockin’1000 comments, “If paradise exists, this is how I imagine it.”

We Are the Thousand made its North American debut at SXSW 2021 Online.