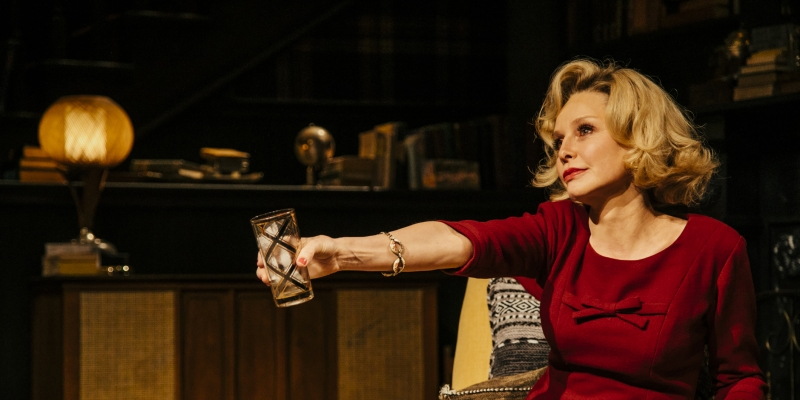 Bitchiness, thy name is Albee. Has there ever been a play that reveled in so much in mean-spirited badinage as Edward Albee’s Who’s Afraid of Virginia Woolf? Sour wit courses through the blackened veins of this show like acidic blood, or more specifically like the booze the characters actively embalm themselves with. There is nothing quite like it in the history of American drama; it looms unsteadily in its corner, a sui generis gorilla ready to take on all comers. The current and brilliant revival of the show at the Geffen Playhouse revs the malefic engine of the play into thrilling life, galvanized by excellent performances from its two leads.

It’s two in the morning in a small New England college town, and history professor George (Zachary Quinto) and his wife Martha (Calista Flockhart) have just staggered home after a faculty party. The party was held by Martha’s father, the president of the college, and George is exhausted from the event, but Martha has a surprise for him – they’re expecting guests. At her father’s request, Martha has invited over new biology professor Nick (Graham Phillips) and his wife Honey (Aimee Carrero), and very quickly the young couple arrives. Unfortunately for them, George and Martha are engaged in a permanent war of wills, fueled by rivers of alcohol. Vicious mind games are their favorite sport, and a long night’s journey into day begins.

Any actors playing the leads in Woolf have to contend with the spectres of Elizabeth Taylor and Richard Burton, who each gave an indelible performance in Mike Nichols’ iconic film version of the play, and happily Flockhart and Quinto are more than equal to the challenge. I knew that Flockhart was a good actress, but I was initially uncertain if she’d be right for Martha, but those concerns were unfounded. She disappears completely into the role, owning both the character’s bulldozing bravado and quiet moments of uncertainty with skill. Ally McBeal is nowhere to be seen. She’s so good that I hope she’ll do more L.A. theater in future.

Quinto is magnificent as George, giving the best stage performance I’ve seen in years. He captures and amplifies all of the character’s complexity, dexterous with the verbal humor and at ease with Albee’s whipsaw changes from comedy to heartbreak and back again. He also nails how George may seem (and be) broken and ineffectual but how in fact he ends up dominating everyone; humiliated and small in one moment and roaring them all to silence in another. I’d never fully realized until this production how much Woolf is really George’s play – he’s the motivating force behind most of the plot, and he has the most stage time. I think Quinto’s performance is even better than Richard Burton’s (and Burton was my favorite in this role), because whereas I never really believed Burton as a broken man but loved his delivery of the lines, Quinto has the chops to credibly play the beaten-down George but also spit out the glorious fusillade of invective with superb style.

I’ve never seen a production of Woolf where the actors playing Nick and Honey weren’t good, and this revival is no different. Carrero excels as Honey, getting all the laughs in the part. She puts her own stamp on the role by making Honey seem less pathetic and more bemused than previous actors I’ve seen, which is a small but welcome change. Phillips is quite good as the initially polite and eventually pugnacious Nick, standing toe to toe with Flockhart and Quinto, which in this play is no mean feat.

Director Gordon Greenberg delivers an ideal production that hits every nuance of the piece with precision and focused energy, taking an undeniably long beast of a play and keeping it compelling. Wilson Chin’s scenic design of George and Martha’s living room is handsome and expertly wrought – a comfortably lived-in academic’s home that is actually a battle arena. Nothing need be said about Albee’s play – it was and remains a masterpiece – but I picked up a couple of new insights from this production. The first are the moments during George and Martha’s verbal brawls where they would occasionally crack each other up and the hostility would vanish, and you realize that on some level they’re enjoying the game and each other. The second was the conclusion of the play, which in every previous production I’ve seen seems like a tragedy, but via Flockhart and Quinto’s portrayals feels for the first time to have the faintest glimmer of hope.

This production of Woolf at the Geffen is that rare thing – a genuine theatrical event that delivers on all its promise. Don’t miss it.

Who’s Afraid of Virginia Woolf?, presented by The Geffen Playhouse, plays at Gil Cates Theater at Geffen Playhouse through May 29, 2022. Tickets are available at www.geffenplayhouse.org.