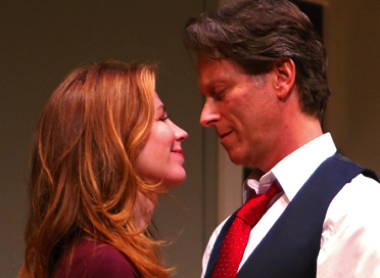 In the title role Dana Delaney transforms Beau Willomon’s middling comedy into a crackling satire that makes a trenchant commentary on the abuse of power.

Delaney plays Chloe, the wife of an ambitious lawyer (Steven Weber) on the short list to be the President’s pick for attorney general. Chloe is a woman of leisure. While her husband Tom is out doing whatever ambitious D.C. lawyers do, she lolls about—reading, shopping, and having affairs. Tom forgives Chloe these trespasses because, like her, he is uber-sophisticated (he’s having affairs himself) and, more importantly, he understands the value of his super-smart, super-attractive wife; a master manipulator if ever there was one.

Those skills come into play when Tom learns that the short list for A.G. is not so short and he is actually near the bottom. His notion for remedying this is to have Chloe’s current lover Peter (Steven Culp) put in a good word for him, at Chloe’s request. But Chloe is fed up with Peter and anyway, she’s conceived a cleverer, more direct plan of action. What that plan is and how she executes it forms the grist of the plot.

Willomon, whose play Farragut North served as the basis for the film The Ides of March, about the disillusionment of an idealistic political intern, aims to reveal the venal quality of Washington politics, and how sex and blackmail are used to control other people. There’s nothing especially new or shocking here. (How could there be, given the barrage of scandals manifest in the real world over the past two decades?) Nor is Willomon’s serviceable script an especially witty one; the laughs the play gets derive (as of course they ultimately should) from human behavior—jealousy, for example—rather than any particular turn of phrase on the art of the playwright. Some of the fleshing out the writer gives the character of Chloe is commonplace; the personal history she reveals to another lady power broker (Linda Gehringer)—a faux confidence if you will—seems typical of any modern independent woman. (First there was love, then there wasn’t…)

Under Pam MacKinnon’s direction, the production flies on the strength of Delaney’s performance, one where less becomes more. While people rant and sweat and freak around her, Chloe stays cool, supremely self-confident and looking like the cat who swallowed the canary pretty much all the time. The pose, struck by a less skilled actor, might be empty and one-note, but Delaney makes it work, to everyone’s advantage. Weber is also excellent as her urbane and knowing spouse—just as jaded as she, but no match for her as a player.

The other three performers inhabit their roles less comfortably. As a beautiful crackerjack law student whose fortunes become entangled with Chloe and Tom’s, Rebecca Mozo seems miscast, without the razor-sharp edge and singular glitter of a rising political star.