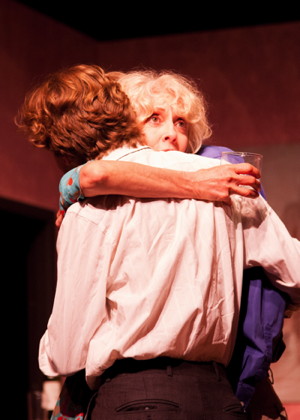 This week my theater review for the LA Weekly is of It Goes Like This, now playing at Marilyn Monroe Theatre at the Lee Strasberg Creative Center in West Hollywood.

Click here to go to the LA Weekly’s theater page and scroll down a little bit to read it.

Written and directed by veteran actor Jack Betts, It Goes Like This is a personal story, clumsily told. Leaden-footed, as if cast in concrete, the melodramatic saga manages to be both utterly predictable yet also contain enough dramatic revelations to rival a telenovela.

Kevin McCorkle rigidly portrays a highly decorated general who runs his family with an iron fist. Against the protests of his gentle wife Colleece (Rachel O’Meara), he is shipping off his guitar-playing teen sons to military school so they can man up. But out of the blue he gets a call that causes his past to crash in on him. Suddenly, he’s confronted by the truth behind the loss of his brother.

Expected though unmotivated, his abrupt volte-face in Act Two engenders a tender speech that proves a highlight in an otherwise exposition-laden script, though the dialogue between the two sons, nicely played by Edan Freiberger and Justin Preston, is well observed.

In both acts a lengthy scene change is energetically undertaken behind an ill-fitting black curtain.