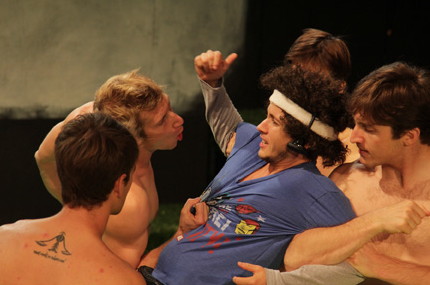 A disturbing play — House of Gold at Atwater 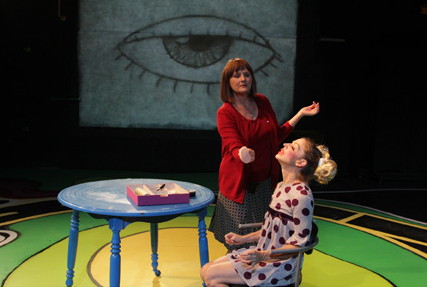 Director Gates McFadden tries to create alchemy with Gregory Moss’ disturbing play House of Gold, but unfortunately it remains a leaden theatrical work. Odd, disquieting and even sickening at times, Moss’ play is marred by lazy and disjointed storytelling.

For his surreal study of modern childhood, Moss took inspiration from the still unsolved murder – and ensuing media frenzy – of child beauty pageant star JonBenét Ramsay. In 1996 the 6-year-old’s tiny lifeless body was found on Christmas Day in the Colorado basement of her family home. Since then the mysterious circumstances of this ghastly and sordid crime continues to mesmerize and titillate the public. At the time, the media described her as “a painted baby, a sexualized toddler beauty queen.” Its main legacy was to introduce the public at large to the mysterious and disturbing world of kiddie beauty pageants.

Moss contrasts the upbringing of two children; one, a bullied and neglected teen boy (Alex Davis) and the other, a little girl who is being prepped and groomed for beauty pageants (Jacqueline Wright). As stipulated in Moss’ play, McFadden has not cast any child actors. Rather, the two younger parts are both played by adults. While this casting approach does lend a welcome element of Brechtian detachment to the play, an autopsy scene went too stomach-churningly far for this critic.

But by naming his central female character JonBenét (once she’s even called her full name, JonBenét Ramsay) Moss expects us to fill in the gaps in his one act play and bring what we know about her to the experience.

What’s missing is the motivation of JonBenét’s Mother (the character is called ‘Woman’ and played by Denise Crosby) – that manic passion for a crown that seems to drive a lot of these pageant mothers who are frantically living through their tiny children. We never gain a true sense of her creepy obsession nor desperation.

Wright is good at evoking the awkwardness of a small girl eager to please the adults she encounters, but she chose to play her childish role as if JonBenét was mentally challenged (reminiscent of the oversized man-boy character Stewart from the MadTV sketch comedy show).

McFadden does a great job with the creative staging and injecting bursts of energy from time to time, but it’s hard to understand why she chose to stage such a fragmented and elusive play. Drew Christie’s distinctive animation, cartoons and ethereal video projections add a haunting element.

in the Atwater Village Theatre complex

Fridays and Saturdays at 8 pm

The box office is open from 12-4pm Tuesday-Friday and again one hour before showtime.

There is a $3.00 surcharge for credit card purchases at the door.