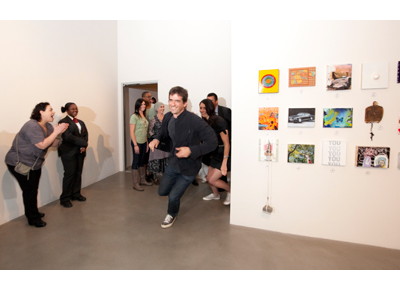 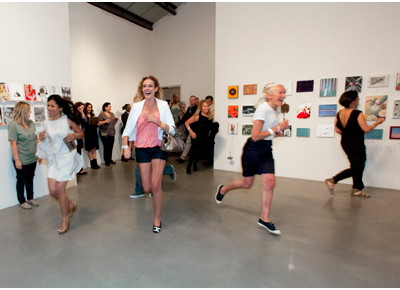 All artworks are the same 8″ x 10″ size and available for only $350.00, plus tax. This highly energized evening encourages attendees, from sophisticated art patrons to first-time collectors, to trust their instincts in selecting the works, as each work is signed on the back and the artists’ identities are revealed only after purchase.

This year, for the first time, the Museum will host PRECOGNITO, a preview and gala that honors philanthropist and collector Eileen Harris Norton, artist Paul McCarthy, and founder of the Bergamot Station Art Center, Wayne Blank.

A festive cocktail reception for PRECOGNITO will be held this Thursday, March 15th from 7 to 10 pm in the Museum’s Main Gallery, featuring musical entertainment by NYC DJ Duo Cassie and Harley. Attendees will be treated to an exclusive preview of the more than 600 works of art available for purchase at INCOGNITO, an elegant dinner by Lene and a wide range of wine and spirits. Media sponsors are Los Angeles Magazine and KCRW 89.9 FM. Doors open at 7pm sharp.

The element of surprise that underlies INCOGNITO reflects the essence of discovery that inspires SMMoA’s exhibitions, education, and outreach programs. All proceeds directly support the Museum.

A variety of PRECOGNITO/INCOGNITO special packages and ticket levels are available. For a limited time: Luminary and Visionary ticketholders will be offered a Valentine’s Day trip to San Francisco to preview Mark Bradford at the San Francisco Museum of Modern Art. This fabulous trip includes a private tour of the exhibition led by Bradford, a seasonal lunch at TRACE, and a delectable dinner at Alice Waters’ famed Chez Panisse Café.

To get a sense of the exhilaration of INCOGNITO, please watch this video produced by Richard Schacter in collaboration with SMMoA staff.  And this time-lapse video by Steve Craig.

Early purchase is recommended, as PRECOGNITO/ INCOGNITO tickets are limited. Tickets may be purchased through Thursday, March 15, after which they may only be bought at the door at INCOGNITO on the evening of March 17 (based on availability).

All ticket purchases are non-refundable.

All tickets (and artwork vouchers where applicable), will be held at Will Call at the Museum on the evening of the PRECOGNITO/ INCOGNITO events. 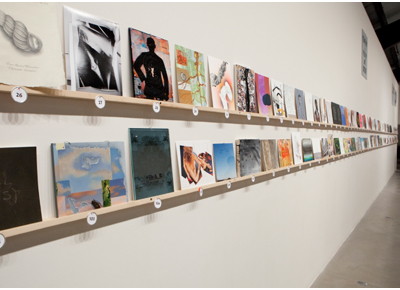 * Luminary seating for 10 at PRECOGNITO Gala and Preview

To ensure reservations for Valentine’s Day trip, Luminary package must be purchased by January 16, 2012

* Round-trip airfare from LAX to OAK

* Lunch at TRACE Restaurant at the W Hotel in San Francisco

* Chance to view other exhibitions at SFMOMA

* Tickets for 10 to INCOGNITO

* No Waiting in Line! Luminary ticket holders will have first entry into INCOGNITO

* Luminary recognition online and on site

Opportunity to designate two seats for an artist and special guest, leaving eight seats for PRECOGNITO ($21,450 is tax deductible)

* Visionary seating for 6 at PRECOGNITO Gala and Preview

* SMM♥A Valentine’s Day trip for 2 to Mark Bradford at his SFMOMA exhibition on February 14, 2012.

To ensure reservations for Valentine’s Day trip, Visionary package must be purchased by January 16, 2012

* Round-trip airfare from LAX to OAK

* Lunch at TRACE Restaurant at the W Hotel in San Francisco

* Chance to view other exhibitions at SFMOMA

* Tickets for 6 to INCOGNITO

* Visionary recognition online and on site

* Cognoscenti seating for 4 at PRECOGNITO Gala and Preview

* Tickets for 4 to INCOGNITO

* Cognoscenti recognition online and on site

* Benefactor seating for 2 at PRECOGNITO Gala and Preview

* Tickets for 2 to INCOGNITO

* Aficionado seating for 1 at PRECOGNITO Gala and Preview

* Tickets for 2 to INCOGNITO

* Ticket for 1 to INCOGNITO

* Entry to INCOGNITO after all other ticket holders

On Sunday, March 18, 2012, there will be a second opportunity to purchase INCOGNITO artworks. The exhibition and art sale continues from 11 a.m. to 2 p.m.; admission is $10 and free for SMMoA members; all the guidelines of the March 17 event apply.

Participating Artists in INCOGNITO 2012 are:

About the Santa Monica Museum of Art

Through its exhibitions, education, and outreach programs, the Santa Monica Museum of Art fosters diversity, innovation, and discovery in contemporary art. The Museum celebrates: expanding boundaries; exploring individual differences; enhancing public knowledge of art; and broadening the art experience. SMMoA is a collection of ideas.

GRACIE: At the Santa Monica Museum of Art

GRACIE is SMMoA’s retail store. A multifunctional shop/storage/installation conceived by artist and architect Allan Wexler, GRACIE offers an inspired selection of books and merchandise that reflects the Museum’s unique mission. GRACIE is named in honor of Board Member and former President Laura Donnelley (aka Gracie), a visionary patron of the arts and SMMoA muse. Shopping at GRACIE is now available online here.

SMMoA is located at the Bergamot Station, Building G1, 2525 Michigan Avenue, Santa Monica, California. The Museum is open Tuesday through Saturday from 11 am to 6 pm, closed Sunday, Monday, and all legal holidays. Suggested donation: $5; $3 for seniors and students. For further information about exhibitions and programs, please call 310.586.6488 or visit their site.