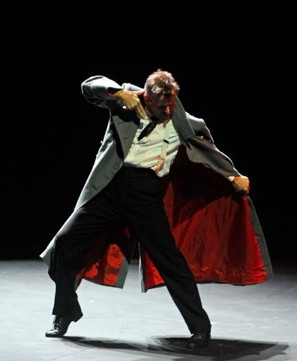 Mikhail Baryshnikov performs “In Paris” at The Broad

Poetic, impressionistic and occasionally melancholy and whimsical, the elegant staging of legendary actor/dancer Mikhail Baryshnikov’s new show, In Paris, is breathtaking. In Paris is only playing for one more week at The Broad Stage in Santa Monica.

A lone figure in a dark trench coat is standing on the dimly lit and highly raked stage. It’s Baryshnikov and his presence hushes the audience before the house lights go down. Meanwhile, way down below the edge of the stage, a woman in a flowered hat begins to move a large, blown-up postcard from one end of the “orchestra pit” to the other. As she hauls it onto the stage, three black balloons float skywards to the sound of birds chirping. She hauntingly begins to sing a Russian folksong as a procession of immigrants emerges from upstage with their boxes of belongings…

In Paris is a simple story about a White Army general (Baryshnikov), a Russian ex-pat who is living in Paris where he meets Olga, an attractive young waitress working in a Russian deli (played elegantly by Anna Sinyakina). Together the two lonely souls embark upon a bittersweet love affair.

This production is the U.S. premiere of In Paris, an adaptation of a short story by Ivan Bunin, the first Russian to win a Nobel Prize for Literature in 1933. Bunin lived in exile in France after the Russian Civil War (1918-1920) and died in Paris in 1953, never having had the opportunity to return to his motherland.

Elegantly directed by Dmitry Krymov, and employing an almost exclusive palette of black, white and grey hues, this poignant show brings the former ballet legend (now 64 years old) Mikhail Baryshnikov, beautiful actress Anna Sinyakina, and the acclaimed ensemble of the Dmitry Krymov Laboratory to the intimacy of The Broad Stage.

Tickets are pricey, but this show is definitely worth seeing.

Approximately 1 hour and 20 minutes, no intermission.

On site parking is FREE.