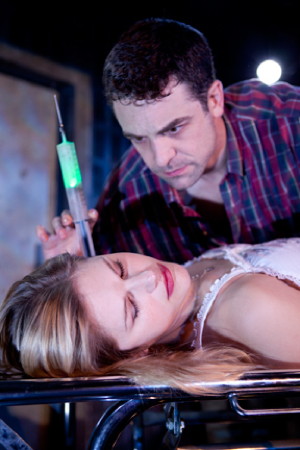 I’m announcing a special giveaway for existing and new Subscribers to ArtsBeatLA.com

(Tell your friends!  Become a subscriber to enter – go here to the home page and select “subscribe” at the upper left hand corner, and then follow the instructions.)

The first people to email me stand a chance to win TWO FREE TICKETS to the multi award-winning hit show Re-Animator™ The Musical. [Ticket value $30—$60.00.]

Simply reply to this email ~ OR ~ send me an email via the contact page of the website to enter the draw.

Use this discount code (008) to save 50% off on select performances*** when ordering your tickets here.

Both deals are good for the first 2 weeks of performances (preview week & then opening week).

Not valid with any other discount.

Re-Animator™ The Musical has been re-animated once AGAIN!

After a highly successful premiere run last year, the show is set to start a brand new engagement at The Hayworth Theatre near Downtown Los Angeles (10-week run only; then off to New York and the Edinburgh Fringe Festival).

Re-Animator™ The Musical. opens on May 3, 2012, with performances Thursdays through Sundays:

Re-Animator™ The Musical’s original cast is back for the new run, including George Wendt, who is best known as the affable Norm from the television show Cheers.

Limited 10 week engagement of the award-winning musical hit before leaving for runs in New York and Edinburgh.

Book by Dennis Paoli, Stuart Gordon and William J. Norris. Music and lyrics by Mark Nutter. Adapted from the story by H.P. Lovecraft. Based on the film H.P. Lovecraft’s Re-Animator produced by Brian Yuzna.

The Hayworth Theatre, on the main stage,