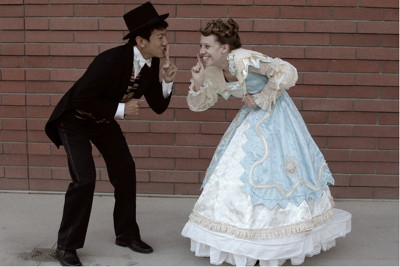 Audiences are in for an evening of hilarity, great songs, great dancing, and loads of fun.

About the stunning new venue:

The Arcadia Performing Arts Center is a new $20,000,000 state-of-the-art facility with 1,200 seats situated on the campus of Arcadia High School. It is the realization of a dream several decades in the making, that Arcadia should have and enjoy a first-rate performing arts facility. It is the one of the largest such facilities situated on a secondary school campus in the Southland. It includes over two-dozen accessible seats for the differently abled patrons.

Now, the new Arcadia Performing Arts Center will host a new production of the 2006 hit Broadway musical “The Drowsy Chaperone,” which won Tony Awards for its writers Bob Martin and Dan McKellar and composer-lyricists Lisa Lambert and Greg Morrison.

A reclusive fellow sitting on a chair in his apartment selects a treasured 1928 musical comedy record from his collection and, when it plays on his turntable, the action of his favorite show “The Drowsy Chaperone” magically appears on stage for the audience to see. Beautiful Broadway star Janet is about to retire from the theatre to marry her true love, wealthy oil tycoon Robert. But her producer and some of his investors (gangsters from The Mob) want to break up the planned wedding in a bid to get Janet to return to the stage. The producer, Feldzieg, sends a seducer, Adolpho, to attempt to woo Janet. He mistakenly tries to tempt her chaperone instead (The Drowsy—actually tipsy—Chaperone of the title). Janet, testing Robert, pretends to be a French girl, Mimi, and gets him to kiss “Mimi” while he is blindfolded. This alienates her.

Will the wedding be canceled after all, or will true love ultimately prevail? “The Drowsy Chaperone” is a spoof of classic Broadway musicals and, in keeping with the spirit of the piece, many of the show’s numerous characters will be pairing up and planning to marry— just in case you doubt that there would be a happy ending.

Steven Volpe directs. A graduate of Cal State Fullerton, Volpe has been producer and technical director for fifteen productions at Arcadia High. Also an actor, he has performed in plays and musicals throughout Southern California as well as on episodic television series.

Arcadia Performing Arts Center has partnered with several area businesses to present this production, including Rose Hills, as well as the Huntington Ave. restaurants, including Denny’s (where tickets can be conveniently purchased) and the Derby.

The Chaperone may be drowsy, but you won’t be. You’ll be laughing, applauding and cheering.

on the campus of Arcadia High School

VIP – $25.00  (Includes priority seating selection and no waiting in the General Admission line).

Estimated Running Time:   Two & a half hours (of fun!)