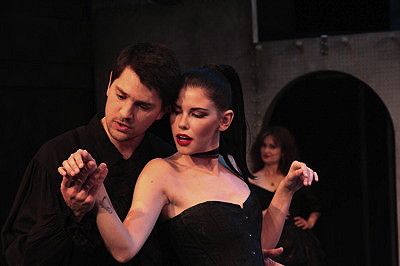 David Ives’ dazzling translation of Pierre Corneille’s farcical play by (first performed in 1644) is vividly brought to life by two casts at Antaeus. Here follows a review of the ‘Tangerines’ cast.

There is so much fun to be had with this hilariously sexy play. The language is so fresh and lively – and in rhyming verse, no less – that you almost can’t believe you are hearing a translation from 17th Century French, complete with silly puns and in-joke references to Molière and Shakespeare.

The story itself is a classic comedy of errors / mistaken identity nonsense that resolves happily by the end.

Set in the houses and public gardens of high society Paris, circa 1643, we meet Dorante (Nicholas D’Agosto) a compulsive fabulist whose elaborate lies get him deeper and deeper into trouble with his wealthy father Geronte (Peter Van Norden). After meeting two women, Clarice and Lucrece, in the royal Tuileries gardens in the heart of Paris, Dorante decides to woo Clarice (Kate Maher), mistaking her for Lucrece (Joanna Strapp). He employs a witty valet Cliton (Rob Nagle) to assist him with his quest. Cliton is impressed with his new master’s skills for improvisatory invention, given he has “…a tragic flaw—I cannot tell a lie!” Meanwhile, Cliton attempts to woo the ladies’ identical twin servants Isabelle and Sabine (Gigi Bermingham) and Dorante is unaware that Clarice is secretly promised to his swaggeringly comical best friend Alcippe (Bo Foxworth).

Above all, the actors seem so comfortable in their roles. It’s clear they all had sufficient rehearsal to be able to forget the mechanics and the complicated text and just have fun with their performances. D’Agosto as Dorante is super-charming and brash, also cocky, glib, witty and cheeky—lunging at every moment and interaction as a challenge to “finesse.” It’s a superb performance.

Do not miss this production!

The Liar by Pierre Corneille, adapted by David Ives.