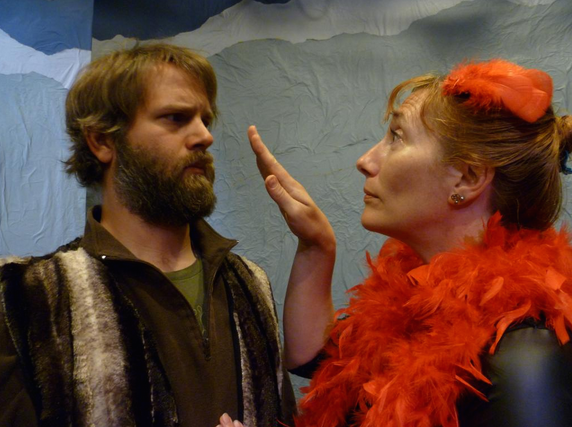 When you hear the term “avant-garde,” the tendency is to think of someone alone on a bare stage considering a pineapple. Happily, Four Tree Plays is not that kind of avant-garde theater, instead offering up a quartet of amusing short pieces riffing on environmental themes.

The talented group of actors includes Dawn Alden, Whit Spurgeon, Leilani Marie Smith and Brendan Weinhold, who also co-wrote one of the pieces. Directed by Tim J. Lim, the segments are woven together seamlessly, providing an hour of thoughtful theater that’s fun, too.

In Nicolas Hoover’s Still Seeking, a sendup of online dating services, Apple (Smith) is drawn to Dogwood (Reinhold) until no-nonsense New Yorker Birch (Alden) points out that his ultra-macho posing is merely a cover for the fact that he’s nothing more than a flowering bush.

In Stina Pederson’s Tree Counsel, simple groundskeeper Ralph (Spurgeon) feels closer to God when he’s sitting beneath an ancient tree, listening to religious radio. But when an attractive young college student (Smith) arrives with the intention of digging up the site in search of important artifacts, his world is shaken.

Weinhold and Spencer Seibert’s Sophistree features Weinhold as an environmental activist committed to saving a tree (Alden) from the developers’ axe, but becomes conflicted when it begins speaking to him and begs to be put out of its misery.

Jennie Fahn’s Does It Make a Sound? takes the theme of survival of the fittest to comical extremes.

Lim’s background is in dance, and it shows here — movement plays an important role in each piece. Catch Four Tree Plays at Schkapf, 6567-6568 Santa Monica Boulevard, Hollywood, June 23, 26, 27, 28 and 29. Consult the Fringe schedule for showtimes and to obtain tickets.

Winner of “Top of the Fringe” in 2012, the Lost Moon Radio team once again brings its A-game to the Fringe Fest with a show that’s a departure from its usual format — and it’s a scream.

Million Dollar Hair is a tribute to the late, fictitious music mogul Bernie Schonfeld, featuring songs performed by the acts he’d nurtured over the years and hosted by malapropism-prone daughter January (Leslie Korein). She takes us on a tour of Bernie’s storied career, high and low points alike. We meet the performers who’d contributed to his legacy, including a lockjaw-afflicted Jimmy Buffett knockoff, a Canadian balladeer, an Eastern European troupe, an onanistic country singer and the sole surviving member of a ‘90s girl-group.

The knowing genre parodies are well-performed, and the lyrics are hysterical. As Paprika, Lauren Flans once again demonstrates why she is the best white female rapper in town, and Korein’s song (from January’s vanity album that flopped and cost Bernie a ton of money) is a riot. Ryan Harrison, Megan Rose Greene, Dan Oster, Frank Smith and Dan Mahoney also contribute mightily to the mayhem, and the band — Dylan Ris, Brenton Kossak, Dan Wessels and Eric Kalver — provide ample musical support.

Consult the Fringe schedule for showtimes and to obtain tickets.

Kurt Gardner is a Los Angeles-based marketing professional and media critic whose love of unusual culture knows no bounds.