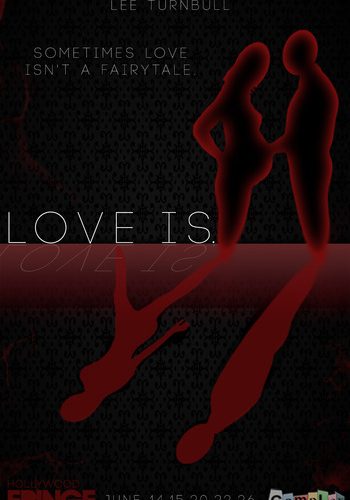 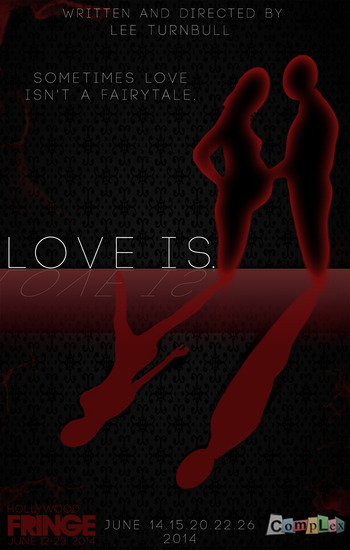 Even though I haven’t seen even half of the Hollywood Fringe Festival shows at this point, I can easily say Love Is by Lee Turnbull has got to be the worst. Well, at least at the very bottom… The rave reviews on the Fringe site had to have been written by friends. Sorry, but this was the epitome of bad theatre! (Plus a huge reason why the Fringe needs to look at show quality before allowing companies to partake, somehow… if that is even possible…)

We knew we were in trouble when we saw it was written and directed by the same dude — Lee Turnbull. That is never a good idea in theatre. I don’t think I’ve ever seen that be completely successful ever. The writer thinks everything is SO IMPORTANT that he directs it that way.

The levels of screaming and cryin) were non-stop painful. Then, I noticed that the female lead was calling the male lead by the writer’s name. So I checked the program. Yup, it was him! No wonder it was so bad. Well, terrible on so many levels.

Some of the actors seemed like they might actually be quite good performers, but who could tell among all this drivel? It offended me, as a theatre practitioner, that this show was even happening. The main guy – the star and writer – seemed to be making up lines as he went along. The dialogue was repeated over and over. There were scenes that were completely unnecessary. The crying and the screaming had me laughing at first until it made me feel violently annoyed.

Finally, at the curtain call, when I saw how smug the lead guy was, it was even more gross. I decided to write a review because these glowing reviews aren’t going to help anyone get better.

Here’s what I have to say to the playwright:  Never direct what you write, dude. Especially, never act in it! I just can’t get over the gall of naming the character after yourself and then having an entire cast say over and over again what a wonderful guy ‘Lee’ is.

Love Is runs for just an hour, but felt like three… There actually could be a bit of an interesting piece here, but it should run no more than 25 minutes. EDIT EDIT EDIT. And then quit, maybe. Or let professionals give you honest advice about the work. I was so disappointed. We randomly fell into seeing this play. I’m just so sorry for anyone watching it.

‘Reviewers’ — I get that you’re supporting your friends.  Bravo!   The rest of you theater seekers checking out the Fringe offerings really should see something else.