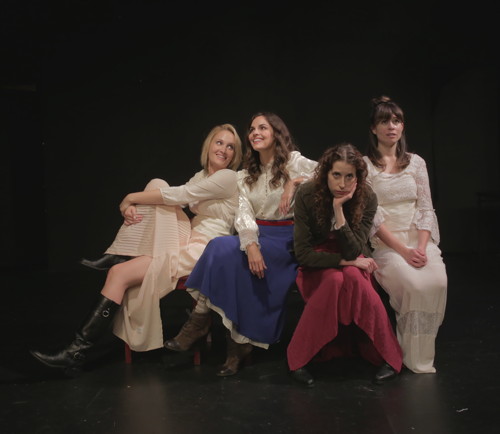 Hey there fellow #LAThtr goers!
Here is an intro and link to my newest theater review for the critical website Stage Raw — which contains the latest arts and theater coverage from our intrepid team of journalists & critics.

One of the hits of this summer’s Hollywood Fringe Festival is back at Theater Asylum.

For her hilarious play Women, playwright Chiara Atik has re-imagined the stripped down plot of Louisa May Alcott’s beloved roman à clef Little Women as viewed through the lens of the popular HBO TV series Girls.

It’s a clever device that works surprisingly well. Not only do both sources readily lend themselves to parody, they mesh beautifully. While not essential, some familiarity with the material will aid in getting the many inside jokes and references. For example, Beth’s frequent coughing elicits laughs as does her comment about only seeing a blank slate when she imagines her future. Her sisters’ callous indifference to her failing health is laced with mordant humor.

Set during the American Civil War, Alcott’s novel follows the lives of four sisters—Meg, Jo, Beth and Amy March — tracing their transition into womanhood. Lena Dunham’s Girls is a comedy-drama that follows the social lives of a close gang of 20-something friends living in present-day New York City.