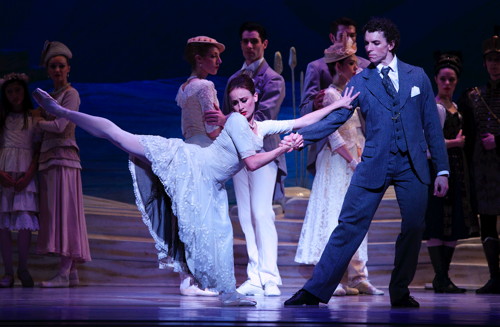 Astonishing. Breathtaking. Exhilarating. There probably are not enough superlatives in the English language to describe the The Australian Ballet company’s stunning rendition of Swan Lake, now playing at The Music Center’s Dorothy Chandler Pavilion until Sunday October 12, 2014. The sublime production features a live orchestra comprised of local musicians but conducted by The Australian Ballet company’s Music Director and chief conductor Nicolette Fraillon.

With its ethereal score by Piotr Ilyich Tchaikovsky, and tragically romantic story, Swan Lake is one of the world’s most beloved ballets. This dazzling modern version, created by Australian choreographer Graeme Murphy, is one of The Australian Ballet’s most successful productions. First conceived and staged twelve years ago, it is considered their signature work and is one of the most featured ballets in the company’s repertoire. This engagement also marks The Australian Ballet’s return to Los Angeles and The Music Center for the first time in more than four decades.

The classic story of the passionate yet tragic love between Odette and Seigfried has been updated and transformed to incorporate a 1910 period setting and aesthetic. The divine costumes and surreal and dramatic sets — both elements exquisitely conceived and designed by Kristian Fredrikson — perfectly complement the visual artistry of this masterpiece production.

Pyotr Ilyich Tchaikovsky composed this ballet in 1875–1876. The scenario, initially in four acts, was fashioned from Russian folk tales and tells the story of Odette, a princess turned into a swan by an evil sorcerer’s curse. (The libretto is based on a story by the German author Johann Karl August Musäus, “Der geraubte Schleier” (The Stolen Veil), although this story provides only the general outline of the plot of Swan Lake.)

In Graeme Murphy’s production, however, a more contemporary interpretation is explored, with a jealous and neurotic Odette becoming banished to a mental asylum for the show’s second act. There, the classic swan sequences — including a twenty two-strong corps de ballet — are rendered as a fever dream sequence. The sheer numbers of the company permit breathtaking tableaux, undulating and rhythmic ripples of movement and simply some of the finest ballet from some world-class dancers. Various ballet and gymnastic feats brought shivers to the spine and, at times, collective gasps from the audience. Emotionally, the story is all there — expressed so vividly and exquisitely with every leap, lift, pirouette and gesture.

Opening night’s prima ballerina was Madeleine Eastoe who brought a fragility as well as a ferocity to her stunning performance of Odette. She shares the demanding lead role with Amber Scott and Leanne Stojmenov.

Kevin Jackson was stoic and angsty as the prima ballerino (or male principal) Prince Siegfried, executing some brilliant leaps and precise lifts. He shares the equally demanding role with Adam Bull and Andrew Killian.

Lana Jones more than met expectations with her performance as the fragile Odette’s romantic rival and villain, Baroness von Rothbart, matching the younger lead’s performance with a robust performance of her own.

Check site for times and tickets.