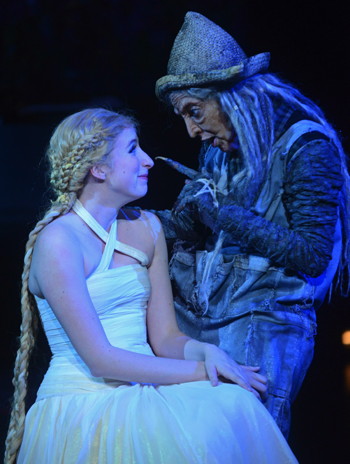 Steven Sondheim’s masterpiece of intelligent writing (music and lyrics), Into The Woods, has been given a substantial production by the Oregon Shakespeare Festival, and imported to the Wallis Complex in Beverly Hills. Using the original orchestrations of long-time Sondheim co-creator Jonathan Tunick, stage director/musical director Amanda Dehnert has cast it fiercely and starts it off with a kind of modern veneer, segueing into the classical period.

In this compilation of a half-dozen European fairy-tales (The Witch, Cinderella, The Baker’s Wife, Rapunzel, Little Red Riding Hood, and Jack and the Beanstalk, with some glancing nods to Sleeping Beauty and Snow White), the creators have interwoven them into a fantastic and wonderfully funny tale. In the past two-and-a-half decades since it opened on Broadway (1987) much has been made of the symbolism behind the re-telling: was it about HIV/AIDS, sex in general, of inter-generational conflicts, or… what? Well, clearly the brilliance of the show is that one can interpret child-eating wolves, or giants brought low, or infertility on the unwilling any-which-way you wish.

The two acts (very uneven, in that Act 1 is just about twice the length of Act 2 – or maybe it just felt that way), set up the problems the characters have (there’s a curse on any procreation the baker and his wife want; Jack is dimwitted but eager to please, so he does right by his magical beans and his giant-slaying; the two princes – one for Cinderella, the other for Rapunzel – who sing about their individual agonies; etc, all coming together in the forest and beyond.

This remains an extraordinary show and this particular production from Oregon shines in all areas, but is specifically best with the singing voices – not a dullard in the pack, making the most of Sondheim’s intricate lyrics and music. (Additionally, you should listen to Gerard Alessandrini’s Forbidden Broadway take on the show, Into The Words – very witty, with apparently some help from the Master, himself – can be found on YouTube.) But it’s still such a joy to sit back and really listen to Sondheim’s songs.

Beginning with the narrator (John Vickery), who becomes “the mysterious man;” the at-first ugly and gnarled Witch, who transforms into a young beauty, of Miriam A. Laube; Jeff Skowron and Rachel Warren (Baker and Wife); Village Idiot Jack (Miles Fletcher in the evening’s most outstanding performance); Robin Goodrin Nordi as Jack’s frustrated mother; Jennie Greenberry as Cinderella, Jeremy Peter Johnson as Cinderella’s Prince (and the voice of the seductive Wolf); Howie Seago as a deaf-mute Wolf; Kjerstine Rose Anderson as a out-of-control Red Riding Hood; Royer Bockus’ blonde-ninny Rapunzel; John Tufts as her suitor; and the others who have been superlatively cast in both action and voice.

I’ve no idea how this will stack up against Hollywood’s movie version, out by Christmas, but this production, with its minimal technical requirements, looks and sounds great. (Set design is by Rachel Hauck; Costumes by Linda Roethke; Lighting by Jane Cox; and Sound by Joshua Horvath.)

You won’t go wrong seeing this now. It’s festive with remarkable work by all concerned.