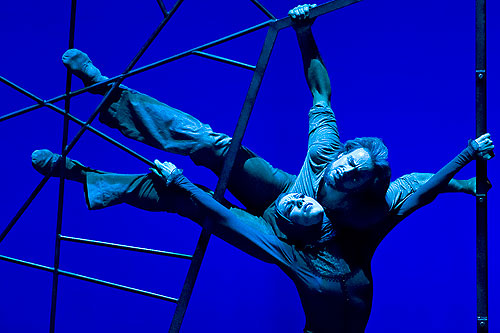 Premier dance events can be experienced this month and next in downtown L.A.

During its eleven-season history, the Glorya Kaufman Presents Dance at The Music Center series has offered wide variety of American and international dance and ballet. This exciting diversity is maintained in their 2014-2015 season, which takes place at three of the four major Music Center venues – the Dorothy Chandler Pavilion, Ahmanson Theatre and Walt Disney Concert Hall.

The season continues with Available Light, choreographed by Lucinda Childs, with set design by Frank Gehry and score by John Adams, June 5-6 at Walt Disney Concert Hall. This is the first co-presentation between Dance at The Music Center and the Los Angeles Philharmonic and a major reconstruction of the seminal work that was commissioned and had its world premiere in Los Angeles at the Museum of Contemporary Art in 1983.

Eifman Ballet of St. Petersburg will bring Rodin, dedicated to the life and creative work of the great sculptor Auguste Rodin and his apprentice, lover and muse, Camille Claudel (June 12-14, 2015) at the Dorothy Chandler Pavilion. (Previously reviewed.)

The season concludes with American Ballet Theatre Principals Roberto Bolle and Herman Cornejo serving as Artistic Directors of two separate shows for BalletNOWTM , a new series featuring world-class ballet stars from Latin America and Europe. BalletNOWTM is a significant and unique endeavor of Bolle and Cornejo in collaboration with The Music Center. One program, curated by Cornejo, will feature major ballet stars from Latin America (World Premiere) and another, curated by Bolle, will highlight stars from Europe, many of whom are world renowned but making their first West Coast appearance.

Renae Williams Niles, Vice President of Programming, The Music Center, said, “We are excited to offer a dance season that brings extraordinary new experiences for our audiences and also honors our continuing association with the great choreographers and companies of the world. I am delighted to have the renowned Australian Ballet with their bold and fresh take on Swan Lake which is set to the music everyone knows and loves yet the distinct narrative makes the ballet current and relevant to potentially new dance audiences.”

Niles continued, “We are always thrilled when we can host renowned companies and artists presented for the first time in Los Angeles and at The Music Center. This season we have three: the renowned Tania Pérez-Salas Compañía de Danza, the exuberant BalletBoyz®, and the newly created, three-performance BalletNOWTM engagement, with Robert Bolle and Herman Cornejo serving as Artistic Directors. Eifman Ballet, one of our most requested companies, returns for the first time since 2005 with their celebrated Rodin. Alvin Ailey® American Dance Theater, one of the most popular dance companies to regularly perform at The Music Center, will make its seventh visit here for the upcoming season.”

“And finally we are pleased to collaborate with the Los Angeles Philharmonic for the festival Next on Grand: Contemporary Americans, to bring Lucinda Childs, John Adams, and Frank Gehry together to reconstruct Available Light, which had its world premiere as part of the inaugural season of the Museum of Contemporary Art in 1983.”

About the 2014-2015 Glorya Kaufman Presents Dance at The Music Center Season:

Available Light, choreographed by Lucinda Childs, with set design by Frank Gehry and score by John Adams is the first co-presentation between the Dance series and the LA Phil and will have two performances only in Walt Disney Concert Hall June 5-6, 2015 as an add-on to the dance season. The work is presented as a part of Next on Grand: Contemporary Americans, an ambitious, collaborative festival across Grand Avenue’s arts corridor. This new production is a major reconstruction of the seminal work that was commissioned and had its world premiere to open MOCA’s Temporary Contemporary, 31 years ago in Los Angeles. Performing to Adam’s original tape score, a company of 12 dancers, who have been working with Childs for two years on Einstein on the Beach, will bring to life refreshed choreography in Gehry’s reimagined set for this landmark hour-long work.

Lucinda Childs is one of America’s most important modern choreographers. She began her career as choreographer and performer in 1963 as an original member of the Judson Dance Theater in New York. After forming her own dance company in 1973, Ms. Childs collaborated with Robert Wilson and Philip Glass on the opera Einstein on the Beach in 1976 participating as principal performer and solo choreographer for which she received an Obie award. Childs has appeared in five of Wilson’s major productions.

Since 1979, Ms. Childs has collaborated with a number of composers and designers, on a series of large-scale productions. Ms. Childs has received a number of commissions from major ballet companies and has choreographed and directed several opera productions including: Gluck’s Orfeo ed Euridice for the Los Angeles Opera, Mozart’s Zaide for La Monnaie in Brussels, Stravinsky’s Le Rossignol et Oedipe, Vivaldi’s Farnace, and a new production of John Adams Dr Atomic for the Opera du Rhin in 2014. Childs received a Guggenheim Fellowship in 1979. She is also the recipient of the NEA/NEFA American Masterpiece Award, and in 2004 she was elevated from the rank of Officer to Commander in France’s Order of Arts and Letters.

Eifman Ballet of St. Petersburg will return to the Dorothy Chandler Pavilion for 3 performances of Rodin June 12-14, 2015. The ballet is dedicated to the life and creative work of the great sculptor Auguste Rodin and his apprentice, lover and muse, Camille Claudel.

BalletNOWTM (Dorothy Chandler Pavilion, 3 performances July 10-12, 2015) is a significant endeavor and first time partnership with dance stars Roberto Bolle and Herman Cornejo stepping into the roles of Artistic Directors working with collegaues and friends from around the world. One program will feature major ballet stars from Latin America (World Premiere) and another will highlight stars from Europe, many who are world renowned but making their first West Coast appearance.

Roberto Bolle is regarded as one of the greatest danseur nobles and sophisticated partners in the world with whom numerous leading ballerinas are thrilled to dance. For his handsome features, perfect physique and great artistry, he is often likened to “Dancing Greek Sculpture.” Bolle joined La Scala Ballet Company in Milan in 1994. After just two years, his performance as Romeo in “Romeo and Juliet” was acclaimed and he was promoted to a Principal Dancer by Elisabetta Terabust who was the Director of Ballet at the time. The promotion led to many opportunities to dance outside Italy. While he has danced regularly at his home theatre La Scala and throughout Italy, in addition he has performed extensively in many countries by invitations of world-famous ballet companies such as Bolshoi Ballet, Mariinsky Ballet, Paris Opera Ballet, Great Britain’s Royal Ballet, and others. He is now Etoile at La Scala Theatre and also a Principal Dancer with the American Ballet Theatre. Since 1999 he has been a Goodwill Ambassador for UNICEF.

Herman Cornejo was born in Argentina. He began his ballet studies in Buenos Aires at Teatro Colon’s Instituto Superior de Arte and continued his studies at the School of American Ballet in New York. In 1997, he won the Gold Medal at the VIII International Dance Competition in Moscow. Mr. Cornejo has performed with Julio Bocca’s Ballet Argentino and has appeared as a Guest Artist with New York City Ballet, Boston Ballet, Cuban Contemporary Dance Company, Teatro Argentino de La Plata, Barcelona Ballet, Ballett Dortmund and at numerous galas around the world. In 1999, he joined American Ballet Theatre and was promoted to Principal Dancer in 2003. Mr. Cornejo has received multiple nominations, awards and distinctions. Among them, Peace Messenger from UNESCO; Dancer of the Year by The New York Times; a Latin idol by Hispanic magazine; Benois de la Danse Prize in 2005 and 2013; the Mr. Expressivity prize at the Dance Open Festival in St Petersburg in 2010 and 2013; Argentinian Pride Award by the Argentinian Culture Center; and winner of The Bessie’s prize presented by the NY Dance & Performance League in 2013 in New York.

About Glorya Kaufman Presents Dance at The Music Center

Glorya Kaufman Presents Dance at The Music Center is one of the leading presenters of dance on the West Coast. The celebrated series offers significant works by prestigious ballet and contemporary dance artists from around the world. Entering its second decade, Dance at The Music Center continues to be a powerful commissioning force through the support of new works and artists-in-residence projects by today’s most influential companies and choreographers. Performances take place throughout The Music Center, from the historic Dorothy Chandler Pavilion to the iconic Walt Disney Concert Hall, providing the ideal setting for distinct and inspiring dance experiences.

About The Music Center

The Music Center is one of the largest and most highly regarded performing arts centers in the country, creating a cultural hub that is central to LA’s status as “the creative capital” of the world. It is home to four world-class resident companies— Center Theatre Group, LA Opera, LA Phil and the Los Angeles Master Chorale—and is recognized for its illustrious dance programming, Glorya Kaufman Presents Dance at The Music Center. The Music Center’s 22-acre campus includes four iconic venues: The Dorothy Chandler Pavilion, Walt Disney Concert Hall, the Mark Taper Forum and the Ahmanson Theater, as well as The Music Center Plaza and the newly opened Grand Park. Each year, more than two million people enjoy live performances and free community arts events at The Music Center. In its effort to extend the reach and accessibility of the performing arts, The Music Center is a national model for arts experiences in which people participate directly through its Active Arts® programming. In addition, The Music Center presents special productions, events and festivals for children and families, including World City™ which takes place in the Keck Amphitheatre at Walt Disney Concert Hall. The Music Center is nationally recognized as a leader in arts education, providing resources to students and teachers in schools and community centers throughout the region. The Music Center was developed as a public-private partnership with Los Angeles County and through the support of the Board of Supervisors, plays an important role in the successful operation of The Music Center.