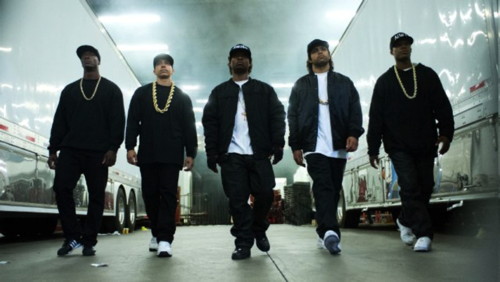 I actually feel lucky to have survived a recent visit to the film set of Straight Outta Compton. The upcoming biopic dramatizes the mid-to-late eighties rise of the groundbreaking rap group N. W. A, and has been beset with plenty of real-life drama swirling off camera. First there were accusations of racism on the extras call sheet (absolutely valid), then a drive-by shooting near filming at the Compton Courthouse, and later a serious scuffle between rap impresario Suge Knight and security personnel that ended with one man dead and another dangerously injured after Knight backed his pickup truck then ran over a man in his haste to flee the set. Not bad for a group that helped to define gangsta rap and catapulted West Coast hip hop into notoriety…

In 1986 a bunch of friends from L.A.’s South Central neighborhood of Compton formed a rap group, largely to use their music to protest against poverty and police oppression. N. W. A stood for ‘Niggaz Wit Attitudes’ and the guys certainly had an aggressive attitude to burn, railing against commonplace police brutality with songs such as ‘Fuck tha Police’ and ‘Gangsta Gangsta.’

Active from 1986 to 1991, the rap group was ultimately comprised of Ice Cube, Dr. Dre, Eazy E, DJ Yeller and MC Ren. N. W. A endured controversy due to their profane and violent lyrics that glorified drugs and crime and also disparaged women in almost equal measures. Describing the oppression and constant struggle of life in the ’hood, the guys called it “reality rap.”

A central figure to the saga, rapper (and one of the movie’s co-producers, along with Dr. Dre) Ice Cube tells me he got involved after he heard that Jerry Heller — N. W. A manager and Ruthless Records co-founder, along with Eazy E — was trying to get the movie off the ground.

Cube says he was hands on, “from the whole concept to gathering all the information to interviewing everybody — we’ve been on the script from Day One. It’s been a two-year process to get it to where we are. We approached the film company and said, ‘Yo, y’all wanna make a movie about N.W.A — dontcha wanna hear from N. W. A, or do you wanna hear it from the bullshit managers? And they said, ‘We wanna hear it from you.’ So that’s how the ball got rolling. We made sure everybody was with it, as far as getting the music rights from Eazy’s estate, and we started to do our homework to make sure we got Yeller’s story and Ren’s story in there. We got it to a point that Dre was on board and Gary [director F. Gary Gray] and it started to pick up momentum.”

According to Cube, the story is broken into two parts. “We’re telling the N. W. A story but also we’re also telling the sign-of-the-times story, because you gotta know why the N. W. A made the kind of music we made — what was the reason, what were the forces at play that were against us. We also wanted to tell the story of Compton from ’85 to ’89, as well as what was going on across the country. What forged N. W. A, what did we go through, why did we break up, the feuds and all of that.”

Ice Cube left the group in 1989, going on to enjoy an impressive solo career as a rapper as well as an actor and filmmaker. He appeared in hit movies such as Boyz n the Hood in 1992 and wrote the screenplay and starred in the successful 1995 comedy Friday, as well as its sequels.

Now 45, and very much a family man, Ice Cube, says he’s proud of his son O’Shea Jackson, Jr., who makes his acting debut by playing him in the movie.

O’Shea Jackson, Jr. seems to have the role down, capturing the Cube attitude and his trademark curled lip sneer. “It’s pretty cool. I’ve been studying my character for over twenty years, now, so I’m comfortable,” says the young actor, who describes himself as a “crisp 23 years old.”

Jackson underwent a screen test alongside two other contenders for the role. “They made me go though my hoops. It got a little hectic, but I made it.” In fact, Cube started coaching his son before the script was completed. “He told me they were talking about doing an N. W. A movie and I want it to be you. We gotta prepare.” Jackson worked with three different acting coaches over two years to find his rhythm and work out how he wanted to appear on the screen. “I trained in New York City for a while — it’s been pretty serious. I’ve always heard these stories of his life, his shenanigans with his crew, so it’s cool to re-enact them. I’ve already picked up some of his mannerisms, just from watching him over the years. A lot of the time it’s about letting go, just being me on the screen and trusting it’ll come out the right way.”

Jackson is reluctant to categorize his first film. “I don’t wanna call it a drama, and it’s not all laughs, either. It has a little bit of everything, and that’s what the best movies do — they make you feel for all sides in this movie and it’s really just a real life movie. I’m glad that we tell the truth about N. W. A and let people see it through my man Gary Gray’s vision.”

A version of this article first appeared in Filmink Magazine, Australia.