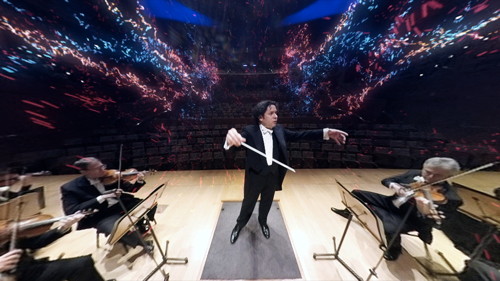 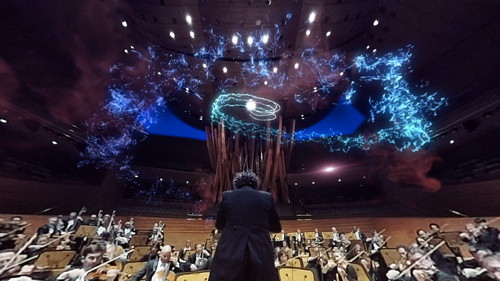 Imagine standing on the stage of the Walt Disney Concert Hall, in front of the Los Angeles Philharmonic, just as Maestro Gustavo Dudamel walks up to the podium.

Suddenly, the scene erupts with the opening bars of Beethoven’s timeless Symphony No. 5, and you are right there next to the orchestra, viewing their performance at close quarters and from different angles. Animations of colored streamers and fireworks explode around Dudamel as he conducts with his usual passion.

Newly launched is VAN Beethoven — a 4-minute virtual reality experience. It’s a new initiative that aims to introduce the LA Phil to a broader audience base. Its launch has been timed to coincide with the upcoming Immortal Beethoven Festival at Walt Disney Concert Hall, during October.

Tickets for Immortal Beethoven are now on sale. For full schedule, and to purchase, please go here.

Also, this Sunday, at the Hollywood Bowl, where Grace Jones will be performing, the LA Phil’s VAN Beethoven, will be on-site for ticket-holders to enjoy, from 5 to 7:30pm.

Best of all, VAN Beethoven is mobile — it really is housed in a van! — so it can travel to provide classic musical experiences for audiences who cannot make it Downtown to the Concert Hall.

VAN Beethoven is a 4-minute virtual reality experience using new Oculus technology that allows you to experience a private concert with the LA Phil from their specially-designed touring truck, which is complete with authentic carpet and seating from Walt Disney Concert Hall. You put on the headset and are immediately be transported to Walt Disney Concert Hall to experience the opening minutes of Beethoven’s 5th Symphony.

VAN Beethoven is supported by a grant from The James Irvine Foundation and project support was provided by the David C. Bohnett Presidential Fund for Discovery and Innovation.

In a recent interview with ArtsBeatLA, David C. Bohnett had this to say:

“It came about a couple of ways. We, at the LA Phil, have an over-arching philosophy of taking the music out into the community — trying to reach new audiences and build their appreciation of classical music. So this is one in a broad set of new initiatives. We already have a lab in place that is looking for opportunities like this. For a couple of years we did high definition theatercasts, where we broadcast our concerts in HD.

“The technology had advanced to the point where we thought it was worth investing in this kind of application.”

Bohnett hopes that people will come to the Concert Hall, and that classical music will appear more accessible. “But I’m interested in piquing a curiosity in people that hear and see this piece, and so maybe they’ll say, ‘I wanna hear more Beethoven!’ or ‘I didn’t think I liked classical music, but maybe I want to hear more!’

But he adds that another component is “What do we learn from this? Do we set up a dedicated space at the Concert Hall for this? Do we tour this around? Do we fund these vans for schools?  I want to learn where we take it next.”

There is also the Orchestra VR (virtual reality) app for android phone now available, and so any with the right phone and decent headset can have this virtual reality experience anywhere in the world.

Unfortunately, when I underwent the VAN Beethoven experience, I found the resolution of the visuals to be disappointingly low. Also the sound level in the headphones is set at a safe and moderately low level… Even though the live orchestra was filmed in high resolution, it’s the translation of that digital footage, to be displayed as a virtual reality ‘head-set’ experience in 360-degree and 3D, that creates a loss in resolution (aka ‘generation’), resulting in slightly blurry visuals.

Nevertheless, VAN Beethoven is a unique and fun experience, and certainly a marvelous way to bring the orchestra to the people.

Additionally, the colorful graphics themselves have a story. The authors of the Virtual Reality experience interviewed Dudamel, asking him about the different forces that may be occurring during the selected piece of Beethoven’s symphony.

Explains Bohnett, “The graphics represent Gustavo’s interpretation of the different elements that are happening at different times in the piece. They’re not just random.”

You can find the VAN Beethoven on these dates.