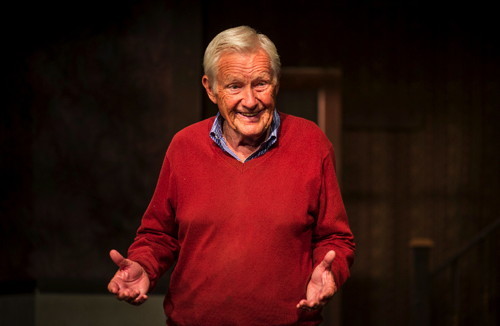 :: STOP PRESS::
Safe at Home: An Evening with Orson Bean has been extended.
The extended run opens January 22, 2016
Performances are 8pm Fridays and Saturdays, 3pm Sundays, through – March 13, 2016
at The Pacific Resident Theatre
703 Venice Blvd. in Venice, CA

This show is RECOMMENDED.

“There’s a danger with one-man shows. What if you don’t like the performer? You’re screwed.” I’m paraphrasing, but this is a sentiment that Orson Bean articulates early into his own one-man show. The ironic implications just hang in the air, unanswered. Before and after this line, however, Bean’s efforts indicate his intent to entertain rather than leave us with regrets.

Why spend an evening with Orson Bean? The now eighty-seven year old performer of stage and screen naturally has a lifetime of memories to cherry pick and relate. More importantly, the man is a consummate raconteur who has honed his sleight-of-hand trickery and comic timing to perfection. His style is amiable and droll, easy and nimble.

Bean enters the stage wheeling a small wooden cart containing a few props, and his friendly, aged face is creased with deep laugh lines. Our host then launches into a casual stand-up routine of jokes that are way older than he is, softening up the crowd. “This is not the show,” he assures us after the third or fourth hoary old gag, “This is the warm-up.”

SAFE AT HOME: An Evening with Orson Bean

Written and performed by Orson Bean