“Murder, Lust & Madness” – BritWeek kicks off with an evening of Shakespeare at the Wallis

Numerous luminaries of stage and screen are set to perform in a star–studded Shakespearean evening hosted by BritWeek at the Wallis. The theme is “Murder, Lust & Madness.”

28 renowned actors — including Joely Fisher, Michael York, Sir Patrick Stewart, Joan Van Ark and Harry Hamlin — will perform a unique and indulgent tribute to Shakespeare on the 400th Anniversary of his death. This special theatrical event is happening on one night only at the beautiful Wallis Annenberg’s Goldsmith Theater in Beverly Hills.

BritWeek is the largest and most visible celebration of the creativity and innovation between the UK and the US. “Shakespeare is every actor’s first love.“ says BritWeek Founder and Chairman Bob Peirce. “This wickedly delicious entertainment will show why as we honor the Bard’s understanding of human nature.”

“The 400th anniversary of Shakespeare’s death will be marked with celebrations, performances, lectures and discussions all around the Globe!” says Louis Fantasia. “Literally, all the world is still Shakespeare’s stage, and I am thrilled that we are kicking off this tenth anniversary year of Britweek, with an evening of some of Shakespeare’s most passionate plays — Othello, Macbeth, Romeo & Juliet, A Midsummer Night’s Dream — in short, an evening of “Murder, Lust, & Madness“ in verse, prose, song and dance from William Shakespeare.”

Performance made possible, in part, by a generous gift from the David E.I. Pyott Foundation. Sponsors include King’s College London.

In addition to the one night only performance of “Murder, Lust & Madness,” BritWeek will present around 40 events throughout Los Angeles during the two–week celebration. Over the past ten years, BritWeek has become a global forum that highlights British excellence and influence in films television, music, fine art, street art, fashion, cuisine, architecture, design, automotive, computer science and sport.

Key events include the BritWeek UKTI Business Innovation Awards on April 27 and BritWeek’s 10th Anniversary Red Carpet Celebration, a black tie gala at the Fairmont Miramar Hotel in Santa Monica on May 1st. 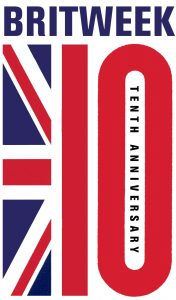 The Wallis Annenberg Center for the Performing Arts,

in the Goldsmith Theater

More information on all BritWeek events can be found on their official site.