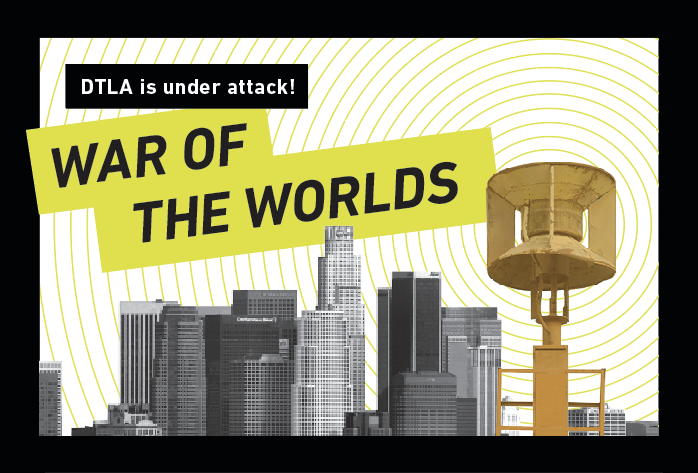 “WAR OF THE WORLDS” – DTLA in November

WAR OF THE WORLDS is a new opera that eliminates the boundary between concert hall and the streets of Los Angeles. Three defunct air raid sirens located in downtown Los Angeles are re-purposed into public speakers to broadcast a live performance from Walt Disney Concert Hall, based on the infamous 1938 radio drama created by Orson Welles.

WAR OF THE WORLDS will be performed simultaneously at four locations on November 12 and 18: the same piece with four different perspectives. Musicians from the Los Angeles Philharmonic will play on the stage of Walt Disney Concert Hall and will be broadcasted through the sirens onto the streets of Los Angeles—while performers stationed at the sirens will send their live report of the alien invasion back to the Concert Hall.

To get the best sense of the total work, make two visits: one to Walt Disney Concert Hall and the other to a siren site.

WAR OF THE WORLDS tickets are now available for all locations.

WAR OF THE WORLDS is made possible in part by grants from the Dunard Fund USA, the National Endowment for the Arts and The Good Works Foundation.

Presented by the Los Angeles Philharmonic.

Co-produced with The Industry and NOW Art.