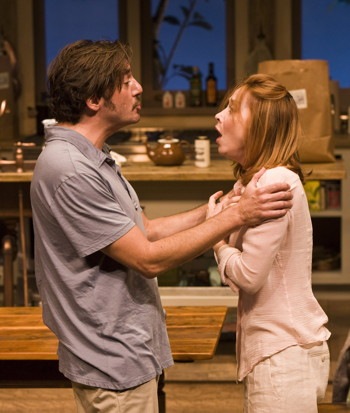 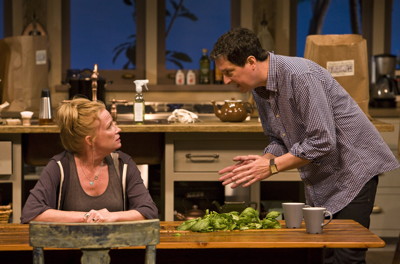 As soon as the lights go up, we are immediately thrust into the middle of a cacophonous argument between two holidaying couples, evidently fuelled by a long night of drinking. The highly heated debate touches on incendiary topics such as morality, history and ethics.

Ella (Johanna Day) and Peter (Christopher Evan Welch) are hosting a weekend getaway at their gorgeous rustic chalet for their friends, Maureen (Sharon Lawrence) and her husband Ian (Reg Rogers). When Ian, a disheveled and charming Brit, tries to argue about “the essence of ‘goodness,’” it becomes apparent that the evening has devolved into a fairly pointless series of disagreements. It doesn’t take long before the personal attacks begin, either, with Ella accusing Ian of playing dirty, claiming “You sneer at anything you can’t argue away – you’re a big baby and a nasty drunk!”  Meanwhile their respective partners look painfully uncomfortable and Peter, especially, seems shell-shocked by the warfare.

But when we learn that there’s some fire behind the debate, during an unspoken exchange of sexual tension between Ella and Ian, all that hot air makes a bit more sense.  What ensues is a weekend out of control.

Rebeck is great at capturing the multi-layered squabbles of long-term couples with her spiky dialogue. There’s a funny scene where the hosts savagely bad-mouth their guests. Indeed, we see Maureen is highly strung and prone to bouts of weeping while Ian is one of those pompous, verbose Britishers prone to rambling. He also seems to delight in messing with his wife’s head with tricky and confusing wordplay.

The hosting couple share observations about the histrionic Maureen such as, “She loses her marbles over nothing,” and “She’s demented – I think he’s driven her insane.” (Here referring to the argumentative Ian.)  It’s hilarious stuff.

There’s plenty of amusing banter, underpinned by serious themes of marriage and fidelity. A long speech by Ian on the nature of sanity towards the end of the play breaks up the dialogue volley and quips that dominate the play.

Tech credits are all excellent, especially John Lee Beatty’s lavish set design. The only instance where I would fault Doug Hughes’ direction is at the beginning of the play where he let Lawrence sound too strident (shouting her lines rather than projecting them) when it was supposed to be normal conversation. Then again, she might have been overcompensating for the yelling that had just been swirling around her.

Also worth noting is Reg Rogers familiar portrayal of Ian. This is almost precisely the same character (a boorish, sleazy stage director) that he played on the TV show Friends twenty or so years ago, though somewhat less emphatic and exaggerated, to be fair.

Approximately two hours and twenty minutes, including a 15 min intermission