In the trailer you look like you’re having lots of wicked, sexy fun!

Green, “Yes, she’s quite a big character. She used to be a servant in the 18th century and she was quite shy but madly in love with her master, Barnabas. He breaks her heart and so she curses him and puts him in a coffin so he can have a think about what he’s done to her. Throughout the years, she’s become this very powerful, successful businesswoman. Then Barnabas comes out of the coffin after two centuries. It’s about this love-hate relationship between the two. She’s great to play because she’s quite irreverent and has a great sense of humor. She’s obsessed with that guy and will do anything to get him. It’s quite funny. She’s more assertive and driven by revenge. There’s a lot of anger and also jubilation because she’s ruined the Collins family. What’s interesting is that little by little she starts losing control and cracking up and you discover a different side of her.”

How did your fabulous costumes inform your character?

“Colleen Atwood is the most talented costume designer. She understands your character. I was wearing a tiny corset underneath so I could look very thin (she laughs). She looks like Barbie, with a very strong, sharp look. Then there’s that amazing red gown that I wear to the party. It’s very ‘old Hollywood,’ very sexy, that’s for sure. Just like Jessica Rabbit.”

You’re natural hair color is a dark blonde, yet mostly for this role you are a platinum blonde. How enjoyable was that?

“It took me a while to get used to it. I couldn’t recognize myself in the mirror. Tim was right because it suited the character. In the 18th century she has black hair. Through the centuries she has adapted to the fashions and she knows that in America blonde women have more power and success and men find them sexy.”

Did you ever try out the wig in public?

“[Laughs] No! My hairdresser had to live with me. It takes a long time to put a wig like that on, with all the glue.”

Do you believe in witches?

“Yeeeees… I believe in the magic related to nature, not Walt Disney magic. My mother writes tales for children and every night when I went to bed I used to ask her, ‘Tell me a story about a witch and she has to be really nasty but it has to end well.’ She’s always had a great imagination.”

“Yes – she’s also great because she’s very ballsy, a very complex character. It was a meaty role, not the typical girlfriend role.”

What was it like working with Tim Burton and his unique vision?

“He’s an artist – he’s very sensitive. I got really inspired by the book of the huge exhibition of his career in New York and LA. It inspired me to build my character, especially the drawings of broken dolls.”

You worked with a legendary director on your first movie –

“Bertolucci gave me a great chance in The Dreamers and I was in awe of him. I used to have a big poster of Last Tango in Paris when I was growing up. I really loved shooting with him – it was so euphoric.”

You’ve had some wonderful leading men – Orlando Bloom (Kingdom of Heaven), Daniel Craig (Casino Royale and The Golden Compass) – what was it like playing opposite Johnny Depp?

“Johnny’s a gentleman. Very professional and brave – he’s not scared of taking risks. I remember my first day of shooting, we didn’t rehearse and I didn’t know what he was going to do. Our characters were having an argument and he was like a sorcerer, almost! Amazingly intense eyes. He always creates such detailed characters. It’s dangerous what he does, and not a lot of actors could do it as well.”

You’re no stranger to wire-work – how did you manage the acrobatic sex scene with Johnny?!

“It was fun but full on. It took a week and a half to shoot. I hate wires, actually. I’m scared of heights, and I wouldn’t call that scene very sexy anyway (she laughs). I’m sure it’s fun to watch, and that’s the main thing. Of course we had stunt doubles, who did a marvelous job. I think it’s Tim Burton’s first sex scene, so I’m very proud to be a part of that! It’s closer to Team America, the puppet fucking.”

Dark Shadows opens in US cinemas May 11, 2012.  Check your local listings.

A version of this interview first appeared in Filmink Magazine. 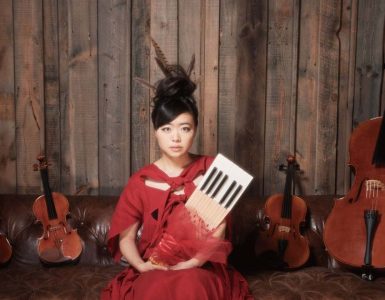 Hiromi + PUBLIQuartet at The Broad Stage

GRAMMYⓇ-winning pianist/composer Hiromi is considered one of today’s most popular jazz musicians. Hiromi will be joined by the extraordinary string quartet PUBLIQuartet to form The Piano Quintet for one evening...