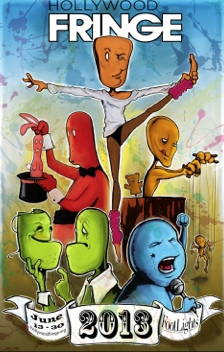 This year’s 4th Annual Hollywood Fringe Festival is just around the corner and today the team has launched a useful app to enhance and improve our Fringe-going experience. See key dates below.

Users who download the free mobile app will have the ability to purchase tickets on their phones to over two hundred festival productions, as well as browse shows by location, time or category. The app provides a personalized experience by allowing users to create unique profiles, manage a list of favorite shows and customize their schedule. Additional features include a map and navigation for all Fringe venues, access to show reviews and a news feed of the latest Fringe events. The app is now available in both the Apple and Google Play stores.

“Some of our early success has been credited to our website, which has a complete set of festival tools for artists and audiences alike, including a custom ticketing service. Going mobile was a natural next step for us,” said Festival Director Ben Hill. “We believe that any person interested in attending our festival should have easy access to the information they need, as well as the ability to purchase tickets on-the-go. The new app is intended to make our event both more navigable and more enjoyable.” Hill is responsible for developing the app, as well as the Fringe’s website, which also recently underwent major renovation.

The app announcement comes exactly one month before the start of the 2013 Hollywood Fringe Festival, which has been extended by an entire week this year. The festival proper will take place June 13th through June 30th, after a week of previews starting on June 6th. More than one thousand performances will occur throughout the fest at over a dozen Hollywood venues. Tickets for all productions are available now and can be purchased at their official site here or on the mobile app.