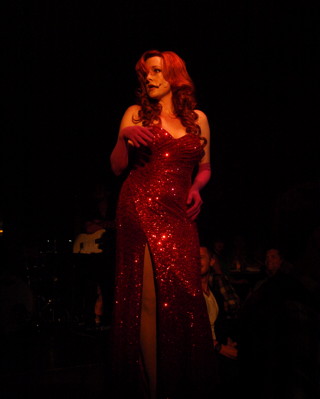 For The Record: Zemeckis just opened at Rockwell: Table & Stage—that cool, fun and intimate supper club in Los Feliz where you can enjoy superb cuisine and delicious cocktails as well as be entertained by a sensational live performance that changes every few months.   (Cuisine review here.)

A handful of celebrities were in the house on opening night last weekend to enjoy the lively show. Actor Demi Moore and her daughter Rumer Willis, also Joanna Cassidy (from ABC’s “Body of Proof”) and Jayson Blair (from NBC’s “The New Normal”) were clearly all having a great time. For The Record: Zemeckis is dedicated to celebrating the dialogue and songs heard in the popular movies directed by Robert Zemeckis—movies such as Forrest Gump, Death Becomes Her, Cast Away, Who Framed Roger Rabbit, Back to the Future and more—by combining songs with snippets of scenes from the various movies.

A cast of seven talented performers (plus the live musicians) give their all, belting out songs such as Turn, Turn, Turn, Light My Fire, Blowin’ In The Wind, Why Don’t You Do Right, Power Of Love, Johnny B. Goode, Go Your Own Way and so on.

The show started with a bang, mashing up California Dreamin’ with a guitar heavy version of All Along the Watchtower. By the time they’d touched on Hound Dog and (I Don’t Know Why) But I Do, I realized it was more about presenting fragments of songs than full versions.

Providing the show’s through line and portraying Forrest Gump (played on screen by Tom Hanks), Derek Manson (pictured right) had the biggest role of the night, also briefly switching to depict Hanks in a brief scene from Cast Away. Lindsey Gort was also great as Forrest’s love interest, the wayward hippie Jenny (played on screen by Robin Wright). Jason Paige as Lt. Dan gave a heartfelt rendition of Everybody’s Talkin’. Impressively, the entire cast managed to sing and jog on the spot for Running on Empty.

Thanks to a vein of tongue-in-cheek humor that runs throughout, For The Record: Zemeckis is a fun-filled evening of song, dance and live music—do not miss this tremendously entertaining show!

For The Record: Zemeckis