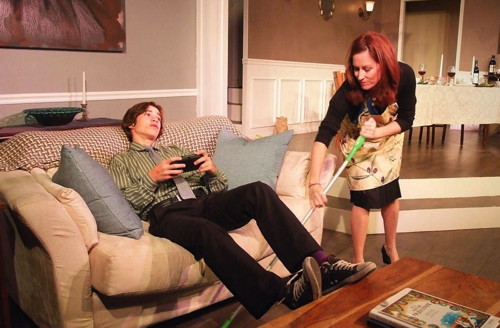 Greetings fellow #LAThtr fans!
Here is an intro and link to my newest theater review for the critical website Stage Raw — which contains the latest arts and theater coverage from our intrepid team of journalists & critics.

A Face in the Reeds by Robin Uriel Russin.

In Robin Uriel Russin’s new dramedy The Face In The Reeds, family members from three generations quarrel during an important Passover Seder — the ritual feast that marks the beginning of the Jewish holiday of Passover. Actually, the Seder is the most probably the most celebrated and beloved of Jewish home rituals, but this one is especially significant for our protagonist Christina (Stacey Moseley) because it’s her first since she converted from the Catholic faith to Judaism.

Russin’s ensemble is comprised of semi-stock characters who predictably clash. There’s Christina, the second wife of gynecologist Barry (a duly patriarchal Chip Bolcik). She’s over compensating and feverishly obsessing over the minute details of the Passover dinner. Their son Mose (Aidan Blain) is convincing as the typical insolent teenaged boy tossing around smart-ass wisecracks. He’s mostly bemused by his Mom’s “hard core” embrace of the faith and taunts his sister with an incriminating photo he has on his cell phone. Rachel (Julia Arian) is Christina’s hostile older stepdaughter, vociferously rebelling against everyone and everything. The kids’ cheerfully obstreperous and profane grandfather Sol (Paul Zegler) is dying of cancer and so has turned to smoking pot for relief, much to his son Barry’s dismay. Representing the outsider (or non-Jewish) dinner guest is Patrick (Tom Berklund), a colleague of Barry, who stands in for those of us in the audience who might be unfamiliar with this hallowed Jewish tradition.

A Face in the Reeds by Robin Uriel Russin.