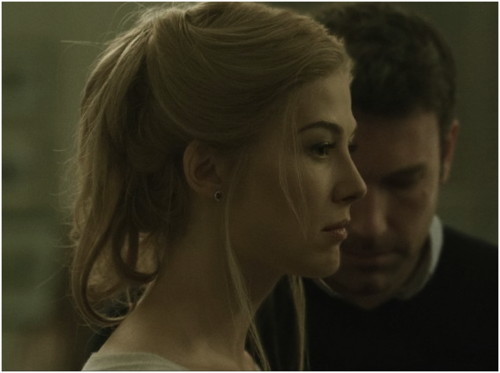 David Fincher’s newest movie is another adaptation of a bestselling novel – this time adapted by the novelist herself, Gillian Flynn. Gone Girl is a chilling thriller that is well worth the investment of 2 hours and 30 minutes of your time.

The movie takes you on the twists and turns of a crime story where the husband is the prime suspect in his wife’s disappearance, including the all-too-familiar trial and lynch-mob persecution by the media.

The movie, in short is sheer perfection. There is not one wasted nor protracted moment. Every nuance is perfectly captured by David Fincher’s clinical eye. The expert casting really makes this movie – it’s all brilliantly done! That unsmiling mother shudder!

All the plot points of Flynn’s cleverly constructed were present but the books naturally offers a bit more detail in some parts, so do read the book if you haven’t already. I really enjoyed both works.

Pike really carries the film in terms of a virtuoso performance, except that Fincher’s shift of the story deliberately places more emphasis on Affleck’s character and even gives him the last word whereas the novel explicitly does not.  Obviously Flynn deferred to the more experienced filmmaker for this (her first) adaptation of her novel to screen and clearly it’s the story he wanted to tell.