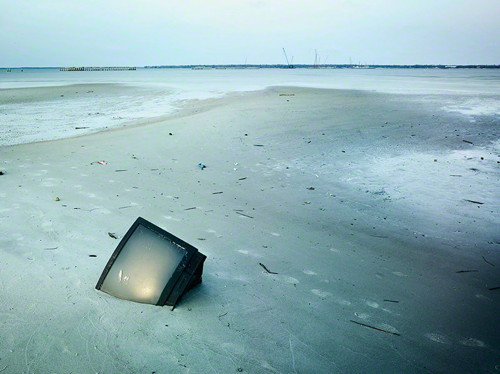 On view from December 13, 2014 to May 3, 2015 at the Annenberg Space for Photography is a timely exhibition focused on coastal resiliency called Sink or Swim: Designing for a Sea Change.

Sink or Swim: Designing for a Sea Change explores the human story of resilience, from adaptation for survival to ambitious infrastructure planning, in some of the richest and poorest of the world’s coastal communities. Rather than showing pristine architectural photography, the photographs present viewers with various human responses to changes in their landscapes that could be intensified by sea level rise. Sink or Swim aims to foster critical dialogue through the provocative juxtaposition of diverse responses to a challenge shared by millions worldwide.

Curated by architecture writer and radio Host and Executive Producer of KCRW’s “DnA: Design and Architecture” Frances Anderton with the Annenberg Space for Photography, Sink or Swim features newly commissioned and archival works by photographers Iwan Baan, Stephen Wilkes, Paula Bronstein, and Jonas Bendiksen. Additionally, this is the first exhibition for Annenberg Space for Photography to feature commissioned works. Through the work of this select group of architectural, fine art and news photographers, the exhibition casts an eye on both the problem of climate change in densely populated coastal regions and contemporary design as a means to navigate the changing landscapes.

“We were eager to organize an exhibition focusing on architecture but adamant that we wanted it to tell the story from a human perspective,” says Wallis Annenberg, Chairman of the Board, President and CEO of the Annenberg Foundation. “We are delighted that these new works tell such powerful stories about resiliency, climate change and architecture as well as engage with viewers on a humanistic level. The exhibit’s capacity to foster dialogue that offers fresh perspectives on the environmental issues of our day — and how communities are rising up to meet the challenges — is very much keeping with the mission of the Photography Space and the Annenberg Foundation.”

Sink or Swim: Designing for a Sea Change.

Skylight Studios is located directly across the park from the Photography Space at 10050 Constellation Boulevard.

Please note that the Annenberg Space for Photography will be CLOSED through Saturday, December 13.

The Annenberg Space for Photography and Skylight Studios close one (1) hour prior to Iris Nights Lectures.

In the face of increasing global attention on climate change and rebuilding in the wake of Hurricane Katrina, the Indian Ocean tsunami, Superstorm Sandy, and the Tōhoku earthquake and tsunami, Sink or Swim is a timely examination of resiliency strategies in architecture and design. Images range from highly complex coastal flood-mitigation in the Netherlands, controversial sea walls in Japan, to innovative homes and community buildings by leading architects including Pritzker prize-winners Thom Mayne, Toyo Ito and Shigeru Ban.

Anderton collaborated with photographers experienced in capturing fragile built environments to determine the locations, design projects and communities across the world that served as subjects for the commissioned works in the exhibition. Sea walls, floating schools and temporary disaster relief housing in disparate ecological and social contexts provide concrete starting points for considering questions about nature, culture and design at the heart of Sink or Swim.

“It has been a privilege to dig into these extraordinary photographers’ rich archives and also send them back out on assignment to create compelling new work that we look forward to sharing with the public through the exhibition,” says Anderton.

“Photography is an ideal medium through which to explore climate change and the built environment because ultimately this is a human story and the photographs get to the emotional heart of that story. Through images of coastal communities—the devastating impact of climate change, including super-storms and rising sea levels, and also the varied and innovated design solutions—Sink or Swim offers visitors the opportunity to engage with and enrich dialogue about all aspects of this predicament.”

An original documentary film commissioned by the Annenberg Space for Photography and produced by award-winning director Steven Kochones and Arclight Productions will include interviews with the artists, architects, historians and scientists engaged with climate resilient strategies for waterfront communities.

Following his experience photographing the celebrated Makoko Floating School (designed by Kunlé Adeyemi for the Makoko community on Lagos Lagoon in Nigeria,) Dutch photographer Iwan Baan was drawn to the lake village of Ganvie in Benin, where residents have lived on the water for centuries. New work by Baan in the exhibition also includes photographs of the massive Deltaworks sea defenses; the promenade at Scheveningen near The Hague in the Netherlands, a flood-protection system interwoven with a tourist destination designed by Spanish firm De Solà-Morales; and the post-tsunami Home-For-All community buildings by Toyo Ito and other leading architects in Japan.

U.S.-based fine art photographer Stephen Wilkes revisited communities he first encountered in the wake of Hurricane Katrina and Superstorm Sandy. His images include striking aerial photographs that present a unique perspective on infrastructure improvements within the context of natural landscapes that remain susceptible to flooding. Wilkes also created portraits of New Orleans area residents in the newly built homes, intended to be models for resilience, by the Make It Right Foundation and Global Green in the Lower 9th Ward and Holy Cross neighborhoods of New Orleans. One of the first photographers to capture aerial images of the coastline damage following Hurricane Sandy, Wilkes documented Staten Island’s Oakwood Beach where homeowners have elected to sell their property to the state, which plans to return the area to wetlands rather than rebuild.

Veteran photojournalist Paula Bronstein traveled to Japan for Sink or Swim and captured the immense sea walls now being built off the tsunami-hit coast of Japan. She also captured daily life in the storage container structures designed by 2014 Pritzker Prize winner Shigeru Ban to house refugees following the Tōhoku earthquake and Tsunami.

Sink or Swim also features Norwegian Magnum Photos photographer Jonas Bendiksen’s documentation of Bangladeshi coastal and delta communities, where increasingly unpredictable and intense flooding has prompted innovative adaptations in a culture that has dealt with seasonal flooding for centuries. Bendiksen spent two years capturing the low-tech structural and farming innovations in the challenging landscape, as well as the floating schools project designed by Mohammed Rezwan for his nonprofit Shidulai Swanirvar Sangstha.

The exhibition also will showcase works focused on California. Dutch-born, Los Angeles-based, photographer Monica Nouwens finds a local example of wetlands restoration in the restored Malibu Lagoon and also captures a very human story of denial, exemplified in a photograph of a California woman walking her dogs, oblivious to a tsunami sign above her head. Mark Holtzman contributes aerial images of nature and infrastructure in California including the Los Angeles River, Mailbu and Oakland. Images by Kip Evans focus on Elkhorn Slough, one of the largest and last remaining coastal wetlands in California.