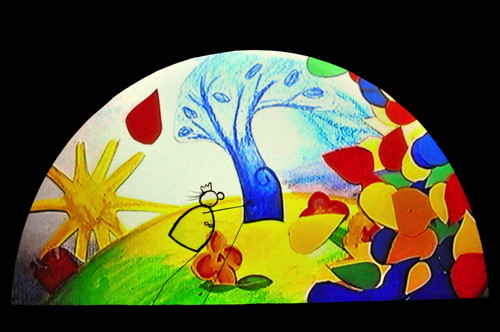 Only a few performances remain for The Queen of Colors, a delightful, hour-long play for small children now playing at the Wallis Annenberg Center for the Performing Arts. This ingenious and unique show combines shadow puppets, music and live painted projections to fashion a sweet story about a little Queen (a small child) who roams about her kingdom.

The show begins with two of the live performers, Eva Noelle and Patrice Langlois, introducing themselves as ‘Court Painter’ and ‘Court Musician,’ respectively. Noelle then takes her place at a desk where her live-action paintings are projected on a screen. Langlois performs on piano accordion and occasionally sings. Behind the screen is a puppeteer, Paul Olbrich (also one of the show’s creators), who manipulates and voices the puppet of the little Queen.

The Queen of Colors, based on the renowned children’s book by Jutta Bauer, uses ingenious puppetry to weave a simple story about kindness and originality. The Court Painter (accompanied by a Court Musician) creates vivid backdrops for the feisty little puppet queen who ventures into her kingdom to experience the personalities of each color of the rainbow.

It’s a gorgeous play with simple themes that are easy for little kids to comprehend. There’s a lot of playfulness and fun in its presentation, too. The show is narrated by, and consists of exchanges between, all three characters — Court Painter, Court Musician and the Little Queen — who each have thick French accents, so their dialogue might be a bit tough, at times, for young children to decipher. The simple story, however, is presented so beautifully through the visuals that it’s not too much of a problem.

The Queen of Colors is perfect for all children, especially those aged between 4 to 7 years of age. 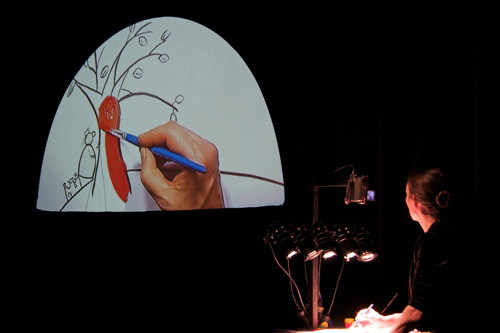 Subscriptions and single tickets, and family dinners ($5 per person) prior to the Friday, January 9th and 16th performances are available here or by calling 310-746-4000 or in person at The Wallis Ticket Services located at 9390 N. Santa Monica Blvd., Beverly Hills, CA 90210.