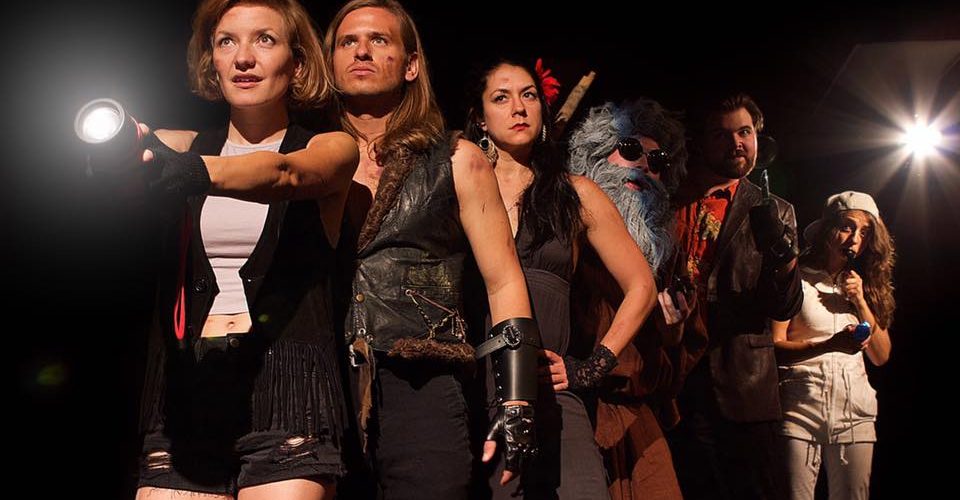 Denizens of an underground civilization and a famous mutant hero are the stars of two musicals making their Fringe debuts this year.

After receiving acclaim at the 2015 Fringe with its first scripted musical, Timeheart, the improv troupe Robot Teammate and the Accidental Party returns this year with a brand-new show, the intriguingly-titled Thug Tunnel. The plot centers on a society of underground dwellers whose ancestors had been driven beneath the earth when its blazing surface became uninhabitable and where their descendants have been living ever since.

A group of these descendants, living in isolation under the iron-fisted rule of Breakin Necks Becky (Nikki Muller) and Stabby Rick (Dave Reynolds), have long since given in to the miserable conditions. Only the ever-optimistic Petunia (Kat Primeau) believes that the surface has regenerated and can once again support life, so she decides to make a break for it along with her adoring sidekick, Panther (Dave Reynolds). To help them navigate the dark labyrinth of tunnels, they enlist the aid of Trash (Miles Crosman), an eccentric loner, who insists that he knows how to get them to the top.

The simplicity of the story allows Thug Tunnel to explore the absurdity of its concept by way of a number of catchy tunes and amusingly off-kilter dialogue. It also takes some welcome and not-so-subtle potshots at the current political environment in America.

As the heroes of the piece, Primeaus Petunia and Reynolds Panther are more or less straightforward characters who are affected by the strange people and situations they encounter. Crosmans gravel-voiced Trash spouts bizarre homilies while consulting his pet rat, Jeremiah, for guidance. Reynolds Stabby Rick has a hair-trigger temper and thinks hes the boss, but its actually Mullers tough-as-nails Becky who holds the real power. Molly Dworsky (also the director) plays Yogurt Stew, a mutant whose abdomen lights up when she consumes expired yogurt.

Under the musical direction of composer Sam Johnides, the band sounds great, and Primeaus lively choreography helps to put the songs across. The book and lyrics were developed collaboratively by the entire ensemble, but it all fits neatly together as a unified piece.

The set is cheap and cheerful a tunnel but thats all thats required when the sole purpose of the piece is to amuse. Indeed, there are a number of gags that exist solely to make fun of the threadbare set. Thug Tunnel plays the Hollywood Fringe June 17-20 at the Sacred Fools Theatre Main Stage, 1076 Lillian Way. Tickets and more information can be found on the Fringe site.

The Toxic Avenger is a cultural phenomenon that will never die whether you like it or not. Since his 1984 debut in Tromas low-budget comedy feature, the character of Toxie has lived on through three sequels, a whole bunch of product marketing and an off-Broadway musical to achieve his arguably iconic status.

This year, the musical makes its Fringe debut in a no-frills production that relies on solid performances and musicianship to put it over. Anyone whos seen the show knows the drill: Nerdy Melvin Ferd the Third (Jared Reed) is upset that his beloved town of Tromaville, New Jersey, is being used as a toxic waste dump, and turns to the crooked Mayor Belgoody (Shirley Anne Hatton) for help, only to discover that shes in on the plot. Determined to put a stop to the pollution, he tells blind librarian Sarah (Kim Dalton), the girl he loves, about his plans. But before he can put a stop to it all, the mayors thugs (Danny Fetter and Wesley Tunison) seize him and toss him into a vat of nuclear waste, which imbues him with super powers and transforms him intothe Toxic Avenger! Good Peoples production at the Fringe revels in its low-budget splendor. Reed does double duty as Melvin and Toxie, and the change in his voice and character after hes mutated is impressive. In addition to portraying the crooked mayor, Hatton also portrays Melvins nagging mother (and a nun). In contrast, Kim Dalton has a relatively simple role as sweet Sarah except shes got to play it blind! Fetter and Tunison portray the lions share of characters, morphing into cops, criminals, hairdressers and whatever else is called for over the course of the show.

The quick changes here are nothing short of extraordinary as the performers duck backstage for what seems like just a few seconds, only to emerge in completely different guises. During one number, for example, Hatton repeatedly alternates between Ma and the mayor to perform a duet between the two, finally emerging split down the middle Ma on one side and the mayor on the other, to finish the song in a most amusing manner.

Joe DiPietro and David Bryans songs run the gamut of styles, all enthusiastically directed and choreographed by Janet Miller. The book and lyrics are a lot of fun, aiming good-natured barbs at New Jersey (and making a few un-PC blind jokes at the expense of Sarah). None of it goes far enough to offend, however. Its a breezy entertainment whose goal is to elicit laughs and groans in equal measure, and it accomplishes that. The Toxic Avenger Musical plays the Fringe Fest through June 26 at the Sacred Fools Theatre Main Stage, 1076 Lillian Way. Tickets and more information can be found on the Fringe site.