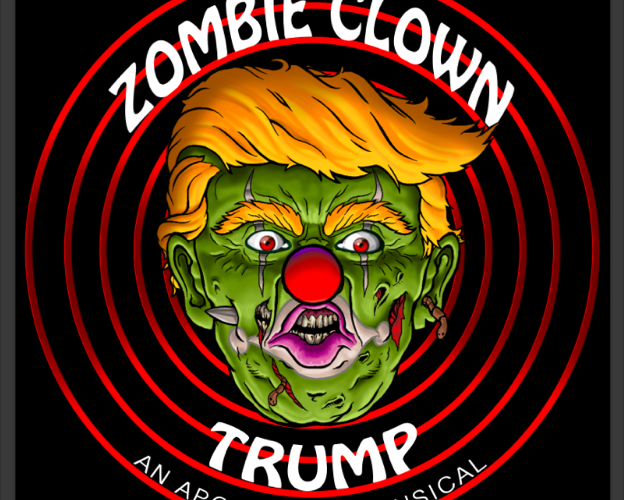 Voices from Hollywood Fringe 2017: exclusive interview with the creator of ‘Zombie Clown Trump’ 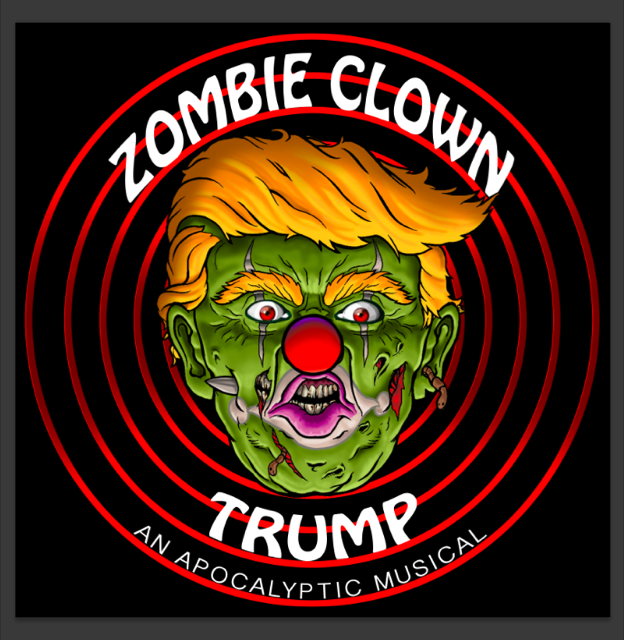 Making its premiere at the Hollywood Fringe Festival next month is the provocatively titled Zombie Clown Trump: An Apocalyptic Musical, and it’s already raising hackles in the community. Hate mail started coming in very early in the show’s development, so the cast and creator decided to work behind a veil of anonymity.

Zombie Clown Trump takes place in 2020, when a certain current president is running for reelection. Syria, Iran, North Korea, South Korea, and Sweden have all been destroyed. In the name of a curative vaccination, Dr. Ben Arson has unleashed a powerful virus on the United States, but now millions of people — including the president — have been transformed into zombies.

From the press notes: “Will our Zombie Clown-In-Chief be reelected and bring the hammer down on the world for good — or will a group of heroes rise up and help deport him to Twitterland forever?”

The creator of the piece was kind enough to answer some questions for me from the security of his underground bunker.

What’s the value of humor and satire in the age of Trump?

For me, the value of humor in the age of Trump is to vent serious frustrations and use satire as a healthy form of protest.

What is it about today’s political climate that’s making the country so divided?

I think that is the subject of an entire book. But some people like chocolate ice cream, others like vanilla, and neither respects the other’s choice, or is willing to take the time to learn about one another’s preferences. Perhaps finding a bridge somewhere along Neapolitan Avenue.

Also, the very fabric of the American Dream has come unraveled. Our politicians have lost the ability to lead or inspire. They’ve replaced positive leadership with old-fashioned mudslinging. In today’s political climate, that translates into exploiting the fear of “the other.”

Michael Moore has just announced he’s doing a Broadway solo show intended specifically to destabilize the president. Do you have a particular agenda with Zombie Clown Trump?

Of course, if Broadway producers come calling, I’ll gladly accept their calls! In the meantime, we’re just going to have fun doing these seven performances at Hollywood Fringe. If an opportunity arises to continue the circus, we’ll cross that clown car when we come to it.

Tell us a bit about the show and what audiences can expect.

The show is about Zombie Clown Trump running for reelection in 2020 while presiding over a zombie apocalypse.

We’re basically conducting our comic sermon for others who, like us, are truly frightened of what’s going on not only in our country, but across the world. We want to provide a safe and enjoyable space for people to come together right now and relieve some tension, aided by the magic of music and laughter.

And, perhaps they’ll come to the conclusion — as I have — that the Trump Circus will one day leave town and order will be restored.

How was this piece developed? What was the inspiration?

I had previously created another zombie musical. When I woke up the morning after this last election, I knew what I had to do to exorcise my own feeling of tremendous powerlessness in the face of such a negative force.

Can you talk about the actors’ backgrounds and what they bring to the piece?

The three other actors involved come from a variety of disciplines and they first and foremost bring courage and an openness to the show. This musical took me about 40 hours to cast. I looked at 600 demo tapes in an effort to find eight actors, and we ended up with four.

Not only was the project censored by the main casting outlet in town, I also discovered that it’s not easy to cast a non-paying theater gig, especially in a place where everyone wants to be a star. They are more focused on themselves rather than the big picture. The Big Picture, in this case, being political protest.

What’s the takeaway you hope audiences will get? 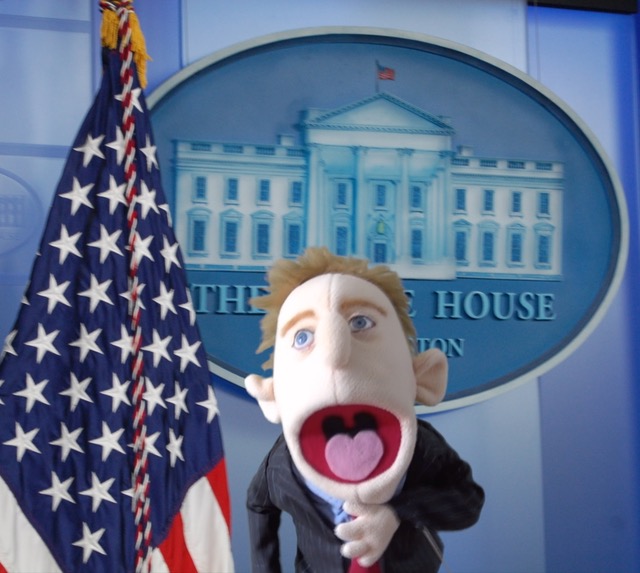 As with all my projects, I like to hear one sentence when it’s through: “That was fun!”

Is this your first time at Hollywood Fringe? How are you enjoying the experience?

This is my first time at Hollywood Fringe and I haven’t yet really been mingling in the Fringe scene. The experience has been a master course in respecting the creative process, going with the flow and making something work, no matter what challenges spring up on a daily basis.

Are there any other shows on your must-see list?

I definitely would want to see Trump in Space.

Zombie Clown Trump: An Apocalyptic Musical has seven performances beginning June 2 at the Complex Theatre, 6468 Santa Monica Blvd. Dates, times, and ticket information can be found on the Fringe website.