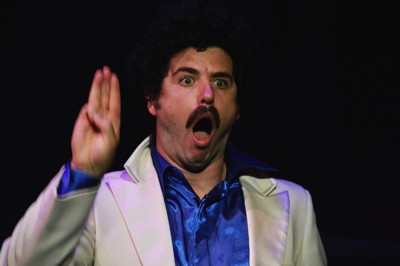 Here are our latest reviews:

Luna Noctiluca, making its World Premiere at The Other Space Theater, is a story of two Salomes told in two parts. The first is a drama, beginning with a dance. Salome in white (Lissa Alvarado), Jokanaan (Bradley Roa II) in black, the music is Bizet’s “Habanera” from Carmen. Shortly after their dance ends the two retire to their separate corners and the play begins. Herod, Herodias, and an especially charming young Syrian (Brandon Hitchcock) complete the ensemble. The second a solo performance, narrated by an unnamed Woman (Kelsie Noel Hill) in a red dress, who piece by piece tells her own story of sexual promiscuity, prostitution, and erotic dancing.

Director Brooke Silva, by way of her twelve-person ensemble, has created an inspired retelling of the Salome myth. Some parts are lovely, others feel a bit unpolished. At times, the two narratives seem in competition rather than in synergy. But Luna Noctiluca, partly based on Oscar Wilde’s Salome and partly based on Charles Mee’s adaptation of the same name, is enjoyable because whatever the pitfalls of a relatively newcomer cast and production team, the intensity level is high. The Woman weaves her way into moments of the story as if she were a ghost present to their actions, and not the other way around. In essence what she inherits is the tradition of dance, madness, and guilt that is the proposed result of Salome’s famous ‘Dance of the Seven Veils’—a dance which is performed in this production.

The staging is stark (a few chairs, a cardboard cut out serving as the Baptist’s cave) but this is the type of performance that can exist very well without elaborate scenic design. Since we are constantly being directed to alternating modes of narration (dramatic action and Woman’s storytelling), Luna Noctiluca works well enough with more left to our imagination.

The story is not a literal reading of either Wilde’s or Mee’s plays, but rather seems to be more about the birth of a theoretical sin that branches out and affects all in some way. Ms. Silva has given us the type of play that takes the myths and does something different, and that, whatever the pitfalls may be, is always worth at least taking a closer look.

Me Rich You Learn is a raunchy two-man show where the intended show is not the actual show and the actual show is something of a task to describe. As part of his community service, ‘Tax Criminal’ TR Hamer (Zach Steel) must present an ‘educational course’ to an audience, us, relaying the pitfalls of tax evasion. Present to ensure that Hamer completes his ‘scripted show’ is IRS Agent Martin Almond (Adam Carpenter). However, much of what comes about over the hour length performance has very little do with financial strategies and more to do with a series of crowd pleasing and often crowd engaging routines. It is only with about fifteen minutes remaining that the puerile Steel declares, “We’re going to do the show now!”

Me Rich You Learn presented by Four Clowns makes its World Premiere at the 2013 Hollywood Fringe Festival with a six-performance run through June 29. Co-written by Carpenter and Steel, and directed by Turner Munch, three-time Fringe Physical Theatre Award winners (2010, 2011, 2012) and 2011’s Best World Premiere and Top of the Fringe, the Four Clowns Company once again puts on a display of their physical-based comedy.

Beginning with Steel prancing around the stage in a clown suit, to scanning (and re-scanning) an imaginary ‘membrane’ wall, to marshmallow eating antics, to a time-traveling duffel bag, to near nudity including simulated masturbation, before finally ending with a little play on Romeo and Juliet (Shakespeare—not their 2011 Fringe Festival Award winner), this is a show run by two ‘clowns’ who are willing to take the joke long past the line of comfort and, for the most part, are rewarded in laughs for their efforts. Steel’s curly brown hair, bushy moustache and engaging eyes lend him a certain sensitivity that makes his character endearing, albeit in raucous fashion. Carpenter’s straight man antics seem to work well combined with his rigid, waiting-to-let-it-all-out demeanor.

The great irony of Me Rich You Learn is that neither character seems to have a clue about either teaching nor getting rich. Perhaps not a show for all, this is a duo who has figured out a working formula to entertain the audience and executes it well. Even if it means stripping down to their underwear to do it… 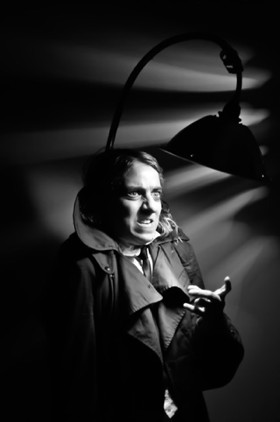 Hands down the best show I have seen at the Fringe Fest this year. Super funny and astonishingly inventive, Deanna Fleysher has crafted a show that depends so heavily on audience interaction (shudder!) that it’s like watching a trapeze artist soar without a net. The audience were all fantastic troupers, mildly improvising and following “Butt’s” cues and storyline. The guy tasked with providing live musical cues throughout was a hoot! A brave, raw and accomplished solo performance. I laughed my ass off! Don’t miss this show.