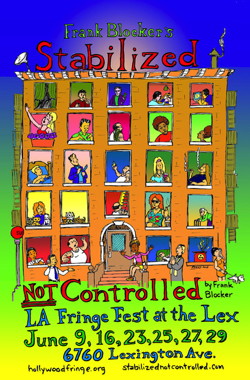 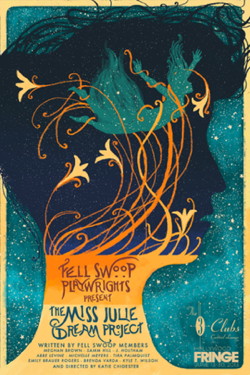 The 4th Annual Hollywood Fringe Festival is in full swing.

So far I have reviewed Experiment and DAVID & LEEMAN: How to Convincingly Fake Honesty for the LA Weekly.

DAVID & LEEMAN: How to Convincingly Fake Honesty is on at the Fringe Mainstage, 6209 Santa Monica Blvd., H’wood.

Other plays I have seen include:

The Real Housekeepers of Studio City – a musical

Stay tuned for links to this week’s reviews for LA Weekly.

The Other F Word was an odd play. More a staged reading than a play, with four women seated on chairs directly addressing the audience (and not each other, not once) about a shared experience, namely the time they all participated in a paid survey of a product that turned out to be a pen designed specifically for women. While this play is inspired by a recent (real life) marketing blunder, it proves a disappointing work despite its robust and thoughtful feminist approach.

Miss Julie Dream Project  Still running at Three Clubs Cocktail lounge, this creative exercise deconstructs Strindberg’s turn-of-the-century classic Miss Julie by inserting a ‘dream’ Miss Julie who pesters the actress starring as the leading lady in a chaotic production of the play. The jokes are hit and miss but the show is, for the most part, entertaining and the cocktail venue is appealing.

Seven Dreams of Falling (ended) by Carey Scott Wilkerson and directed by Thomas Anawalt was an updating of the myth of Icarus, re-imagined as a reality TV show. A curious piece.

On my ‘dance card’ so far are the following plays, so stay tuned for further reviews: