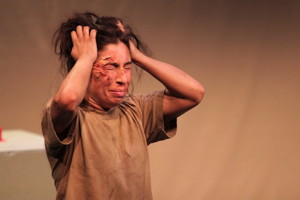 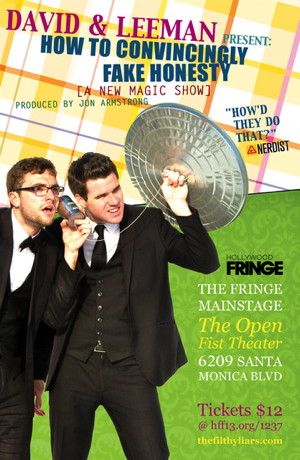 Hello readers! This week we’re all covering the Hollywood Fringe Festival for the LA Weekly, so my two reviews are of Experiment, and DAVID & LEEMAN: How to Convincingly Fake Honesty, both now playing in Hollywood.

Running a taut 20 minutes, Melanie Wehrmacher’s play is exactly the right length for her slight yet compelling study of psychological torture. Two prisoners — one male, one female and each scarred and badly beaten — cower on the floor of a bare cell. Footsteps echo ominously, as does the intermittent tone of electrical torture followed by ghastly screams. Tensions run high as we observe this nervy pair unravel and turn on each other. Director Tamiko Washington nicely orchestrates the intensity, while Alexa Giuffre and Sean Burgos give convincing portrayals of pure anguish. It’s an intense work.

For their slick and comical magic show, two card sharps (David Blatter and Leeman Parker) pour forth a constant stream of smooth patter that is as perfectly timed as their split-second feats of prestidigitation, dexterous legerdemain, sleight-of-hand card tricks and stunts (they explain the difference), sight gags and silly bits of comedy.

Frequently calling on the audience to participate, they delight with a series of miraculous routines. The three loose acts include a Dada-inspired entre’acte, and the swift, 45-minute show concludes with an elaborate tribute to the charlatan spiritualists who spooked the early 19th century.