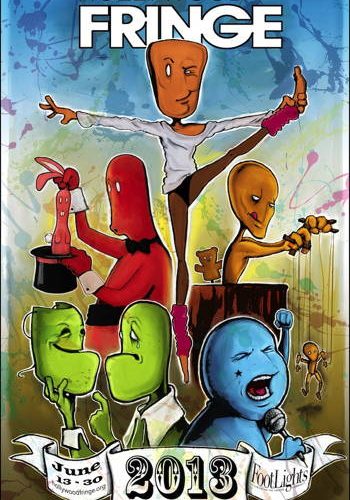 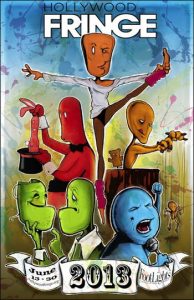 Next time can the theme be ‘Bikini Beach Party’?!

It was an enthusiastic if overheated crowd that packed the house to the rafters at Fringe Central last night to witness the exciting conclusion of the 2013 Hollywood Fringe Festival.  This year’s award winners were dubbed ‘Freaks’ in various categories at the annual Award Ceremony and Closing Night Party. Over 600 people attended the event, and seemed cheery despite the sweltering heat inside the venue. MC for the night, Jon Armstrong (director of the marvelous magic show DAVID & LEEMAN: How to Convincingly Fake Honesty) was probably wishing he hadn’t worn a three-piece suit…

The Freak Awards are community-voted by Fringe participants and attendees.

Additional performances for The Third Date are Friday, July 19 and Thursday, July 25, at 8 p.m.

Check the Fringe official site for dates and times of all extended Fringe shows.

The fourth annual Fringe, which was a full week longer than previous years, was a huge success according to festival organizers, with record-breaking online ticket sales and attendance. Official numbers and year-to-year comparisons will be released in the coming weeks after settlement is complete.

All photos by Jesse Herwitz.

ABOUT THE HOLLYWOOD FRINGE:

It’s not too early to create a project for the 2014 Hollywood Fringe Festival. Click here for full registration info. Inquiring parties can also contact the festival at [email protected].