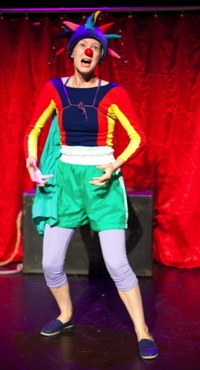 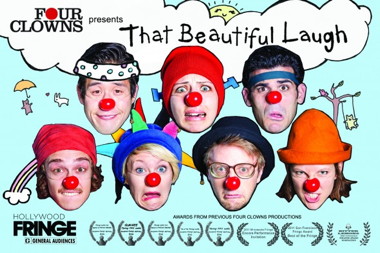 At last Saturday night’s 10pm Fringe performance of Four Clowns: That Beautiful Laugh, at Open Fist Theater in Hollywood, I found myself sitting in a large audience of about 200 people all set for a hilarious good time. To the extent that they laughed uproariously at Artistic Director Jeremy Aluma’s not-at-all-amusing introduction that explained that this show was the Four Clown company’s first foray into children’s theater. Even Aluma seemed surprised, commenting, “Wow, you guys will laugh at anything!”

And laugh at anything this crowd did.

Four Clowns: That Beautiful Laugh has a cast of seven clowns who, following an extremely brief shadow puppetry intro of a rocket ship leaving the earth, individually emerge from a trunk. As each colorfully dressed, red-nosed clown takes the stage, they become frightened by the appearance of the next clown. This entails lots of yelling and falling over. Backstage one of the unseen clowns is playing a sweet tune on a mouth melodeon. There’s some business of childlike wonderment as the clowns explore their strange environment. Later they overcome their fear of the audience and try to make friends with them, clambering over seats and into people’s laps.

An old man clown picks up a book and starts tremulously to tell a tale of a time when people forgot how to laugh. This is apparently the premise for the show, but after this intro is spoken, the storyline is dropped, never to return. Instead we get a lot of yelling and a series of pointless pratfalls – not even clever or skillful ones, either. At one point the clowns discover ‘noise’ and begin to experiment with foot thumping that almost arrives at a ‘Stomp’-style percussion sketch. Almost…

Apart from the ‘old man’ clown (Marvin – played by Andrew Eiden) there was little delineation in personality between the seven clowns. Even their costumes and hats were confusingly similar. For example, one clown Robecca [sic] (Bri Price) wore stripey pants and a beanie whereas another wore plaid pants and a felt hat… One clown had a trumpet. Raymond Lee played a fey clown called O’Precious. Loretta (Lis Roche Vizcarra) wore a cute and multicolored ‘medieval jester’s’ hat with tiny bells at the end of each point, but inexplicably returned to the stage minus this distinctive hat for a good portion of the hour-long show. Why?

Four Clowns: That Beautiful Laugh basically consists of random nonsense, half-baked ideas and undeveloped, messy almost-routines that lack focus. For a show for kids, I craved the simplicity of The Wiggles or Bananas in Pajamas or even the Teletubbies! At least the Troubadour Theater Company has clowns who demonstrate training and comedy skills.

One sketch involved one-upmanship as two clowns try to outdo each other with increasingly large red noses. The old man clown does a coin trick. O’Precious does a hula-hoop stunt and later does a great version of Satchmo (Louis Armstrong). A Three Stooges-style routine of inflicting pain and beating each other up does not seem suitable for kids.

None of these fragments of sketches is especially funny, nor skillful.

I did enjoy the simple ‘Houdini’ trick of making clowns disappear behind a blanket and the shadow puppetry sequence about ‘Scarywood’, but even that sequence was monosyllabically narrated by O’Precious. Lame!

Worst offence of all is the grief-stricken FUNERAL at the end of the show. Really guys?  You couldn’t bring the missing-supposedly-dead clown back to life through the magic of theater?!  You honestly think a show for kids – any show – ought to have such a downbeat ending?

I may have smiled once or twice but Four Clowns: That Beautiful Laugh was not funny enough to elicit a single if Beautiful Laugh from this critic. And believe me – I love to laugh!