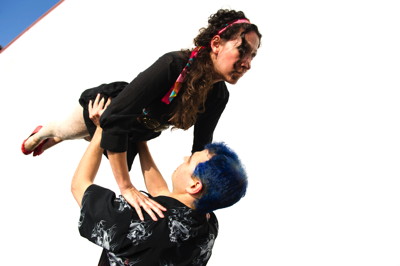 I had heard raves from my fellow critics about this show, so my expectations were reasonably high.

Alas, those expectations were dashed by a play that had its merits (the incisive storyline was excellent) but was largely tedious to endure. Way too much yelling going on, methinks.

The much-touted movement aspect of the piece was well synched to the text but left this critic cold. I spent a lot of my time watching the mirrored images screened upstage, but some were ill-chosen, poorly rendered and eventually became repetitious. Some of the projected art works were wonderful, though.

Basically, this was a show I enjoyed more upon reflection than I did throughout its 80 minute duration.

Here’s an updated show list of my Hollywood Fringe Festival reviews. Click on the active links in the play’s title to go to its review page.