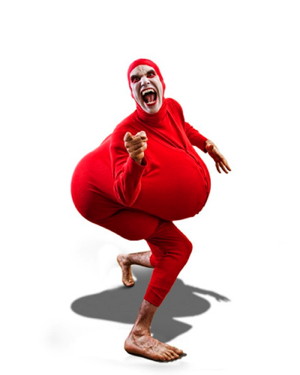 Less a solo-performance, more an exercise in terrorizing the audience, Cirque du Soleil clown Eric Davis coyly emerges from behind a curtain upstage to reveal an exaggeratedly bulbous and lumpen form clad in stretchy red spandex. Red-hooded, bare-footed and strutting like a chicken, Davis takes to the empty stage and for the course of his 80-minute, one act show proceeds to interrogate audience members, aggressively insisting on participation and extracting private hopes, dreams, details such as where they work and if they like their job. He grimaces at us, glaring with demonic eyes, rimmed with red eye shadow. This audience interaction forms the sum total of this unusual “performance” – confessional at times and confrontational and challenging at others.

“Welcome to the theater of life,” he announces. “Something interesting must happen every 10 seconds!” Davis is intent on playing with audience’s expectations of immediate entertainment. At one point he impels the audience to jump up and swap seats – chaos ensues – and later incites an exciting competition between the two sides of the house.

With Red Bastard Davis brings a salacious, lip-smacking, profane, punk-rock (“bouffon”) style to his clowning, increasingly pushing the limits of what makes you, the audience member, uncomfortable.

As he reminds us, theater is “the only medium where you get to be with the performer when they create their art,” and Davis exposes himself in the most honest and raw way at the same time as harassing his audience.

It’s a sobering reminder of how far theater can go.

At Artworks Theater, Hollywood, first Monday of every month, 8 p.m.

What the other critics are saying: